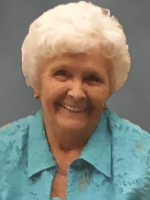 ALBANY – Margaret Mulholland “Marge” Walsh, 92, passed peacefully while surrounded by the love of her family on June 9, 2018.  Margaret was born on September 28, 1925 in Brooklyn, NY.  She was raised in Ozone Park and attended John Adams High School.  After high school she was employed by the New York Telephone Company, where she was a pioneer working with computers.  On September 2, 1950 she married Jack Walsh.  Together they began their family of eight children, finally settling in Albany in 1963.  She worked at Westmere School in the special needs class displaying her compassion that would be known for the rest of her years.  She followed in her mother’s footsteps and became a parish secretary at St. Patrick’s Church, Albany, continuing on to St. Margaret Mary’s and the Chancery as a bookkeeper.  In her later years she enjoyed long rides with Jack and spending time with her grandchildren.

The family would like to express their deep gratitude to the staff, past and present, on the 3A floor wing of the Teresian House for their loving care of Mom over the past 5 ½ years.  Their support meant so much to all of us.

Funeral services will be held in the Hans Funeral Home, 1088 Western Ave., Albany, Thursday morning at 8:15 a.m., and from there to All Saints Catholic Church, 16 Homestead St. (behind CVS) at 9:00 a.m.  Relatives and friends are invited, and may call at the funeral home Wednesday from 4-8 p.m.  Interment will be in St. Agnes Cemetery, Menands.

The family suggests memorial contributions to All Saints Catholic Church, 12 Rosemont St., Albany, NY 12203; or to the Teresian House, 200 Washington Ave. Ext., Albany, NY 12203.  To leave a message of condolence for the family or obtain directions to the funeral home, please visit www.HansFuneralHome.com.

Offer Condolence for the family of Margaret M. “Marge” Walsh

A Certified Celebrant is a person who is trained and certified to meet the needs of families during their time of loss.  A Celebrant serves by providing a funeral service that is ...  END_OF_DOCUMENT_TOKEN_TO_BE_REPLACED