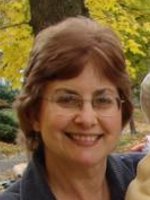 ALBANY – Loretta Rose Oppedisano Kelly, 63, of Albany, passed away at St. Peter’s Hospice on Thursday, September 16, 2010 following a courageous 8 ½ year battle with multiple myeloma.  Born in Albany on March 31, 1947, Loretta educated herself and earned a Bachelor of Science degree from Russell Sage College.  She loved being a Physical Therapist, especially her work with the Visiting Nurse Association of Albany, the Center for the Disabled, and her private patients.  Loretta’s greatest love was her beautiful daughter, Kristin, her precious grandchildren, Francesca Loretta and Sebastian Constantino, and her loving son-in-law, Sebastian Allan Vicencio.  She wanted to express her gratitude to her sister Nancy Andre, her brother Richard, and sister-in-law Rose (Rocco) Oppedisano who gave her so much support and encouragement during the course of her illness.

Loretta was predeceased by her parents Joseph and Mary Oppedisano, and her brother Joe (Jodie) Oppedisano.  Survivors include her daughter Kristin Kelly-Vicencio; her son-in-law Sebastian Allan Vicencio; her grandchildren Francesca Loretta and Sebastian Constantino; her godson and nephew Joey Andre (Kelly) of Grafton; her nieces Alicia Andre Sousa-Saints (Justin) of Bermuda, Rachel Andre of Albany, and Christopher Andre (Cheryl) of Portland, Oregon; her brothers James (Barbara) and Richard; her sister-in-law Rose Rocco Oppedisano; her sisters Rosemary Grieco of Albany, Antionette Bosco of Brookfield, Connecticut, Jeannette Oppedisano Laird (Ken) of Castleton, and Nancy Andre (Joe) of Henderson, Nevada.  She is also survived by many other close nieces and nephews and great nieces and nephews, who brought her much happiness over the years.  Loretta felt very fortunate to have childhood friends, especially Gail Notz Cotler and Patricia Daley Harvey, who remained loyal to her over the years.

Funeral services will be held in the Hans Funeral Home, 1088 Western Ave., Albany, Sunday afternoon at 4:00 p.m.  Relatives and friends are invited, and may call at the funeral home Sunday from 1-4 p.m. Interment will be held privately at a later date.  In lieu of flowers, Loretta wished that contributions would be made in her name to the Juvenile Diabetes Research Foundation (JDRF), 15 Tech Valley Drive, Suite 4, East Greenbush, NY  12061.  To leave a message of condolence for the family, or obtain directions to the funeral home, please visit www.HansFuneralHome.com.

Offer Condolence for the family of Loretta R. Kelly

A Certified Celebrant is a person who is trained and certified to meet the needs of families during their time of loss.  A Celebrant serves by providing a funeral service that is ...  END_OF_DOCUMENT_TOKEN_TO_BE_REPLACED