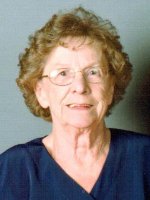 GUILDERLAND – Leota “Lee” Zyniecki, born April 12, 1928, left this world gently on February 4, 2014, eleven days after her husband of 65 years passed away.  She died in the comfort of her home with family present.  Lee was born and raised in Detroit Michigan, the daughter of Alberta and George Gouckenour.  She often spoke of her fondness for the family camp in upper Michigan where she spent much time as a child.  Surely this is where her knowledge of trees and birds came from.  Lee reportedly was the last person in Michigan to receive her driver license at the age of fourteen.  She met her husband, Edward, and they were married in 1948, eventually settling in Guilderland in 1953 where she raised seven children.  As a young mother with a growing family, Lee found time to dedicate to community oriented organizations including 4-H, Westmere Elementary School PTA, Western Turnpike Rescue Squad, American Heart Association and spearheading neighborhood fund raising efforts for the American Red Cross and the March of Dimes. Lee was also actively involved in the Red Cross Learn to Swim program. She was active in local politics as a Republican Committee Woman in the Town of Guilderland and for many years she was an election poll watcher in McKownville.

Lee was a self-taught book keeper working for Wendell Cadillac, Vermeer Sales and Service and the Albany Jewish Community Center.  In 1981 she and her husband opened Edleez Tobacco at Stuyvesant Plaza where she managed the family business until her passing.  During this time she remained community spirited with her support for the Make A Wish Foundation and Guilderhaven Animal Shelter.

Lee earned her pilots license and traveled extensively with her husband in their plane.  She was very thankful for these years and the time they shared traveling together. In recent years Lee devoted much of her time, unselfishly, to the care of her husband.

The family wishes to thank the very caring neighbors who have helped out in recent times with the care and well being of our parents especially Paul and Patty Halderman.

The Hans Funeral Home is handling arrangements; a memorial service will be held at a later date at the convenience of the family.  Contributions in Lee’s name can be made to Guilderhaven, Inc. 6655 Route 158, Altamont, NY 12009.  To leave a message of condolence for the family or send a sympathy card, please visit www.HansFuneralHome.com.

Offer Condolence for the family of Leota Zyniecki

A Certified Celebrant is a person who is trained and certified to meet the needs of families during their time of loss.  A Celebrant serves by providing a funeral service that is ...  END_OF_DOCUMENT_TOKEN_TO_BE_REPLACED