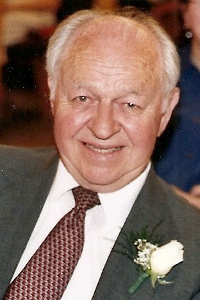 ALBANY – Leonard P. Bopp, 91, of Albany, passed away on Friday, March 27, 2020 at St. Peter’s Nursing and Rehab Center.  Leonard was born in Albany, the son of the late Valentine J. Bopp and Catherine Tiernan Bopp.  He was a graduate of Philip Schuyler High School and was employed by the Roman Catholic Diocese of Albany for 55 years as Building Superintendent at the Mater Christi Seminary and the Pastoral Center.  He also was a communicant of the Parish of Mater Christi and the former St. Catherine of Siena Church.

Leonard was a man of deep faith who was dedicated to service in his church community.  He was a generous and loyal friend to his neighbors and Diocesan colleagues.  And, he was a loving spouse and father who took great pride in his   children and grandchildren.  He was wise, compassionate and always ready to offer support.  His greatest joy came from the company of family and friends coming together to celebrate events large and small.

Leonard was predeceased by his dear wife Zoe Conley Bopp in 2009.  He is survived by his children and their spouses Cynthia McLean (Bob) of Albany, Michael Bopp (Linda) of Guilderland, Thomas Bopp (Liz) of Randolph, NJ, Judith Campisi (Daniel) of Wilton, CT, Daniel Bopp (Wendy) of Kinderhook, James Bopp (Jane) of Brunswick, and Lisa Meurs (John) of Loudonville; twelve grandchildren, seven great grandchildren; his sister Audrey Hauprich (Donald) of Ballston Spa; his brother Paul Bopp (Agnes) of Delmar; his sister-in-law Bea Bopp of Loudonville; and many nieces and nephews.  He was predeceased by his brothers John and Kenneth, and his sisters Caroline Dangler and Irene Havens.

Funeral services will be held privately, with interment in Our Lady of Angels Cemetery.  A memorial mass will be planned for a future date.  Arrangements have been entrusted to the Hans Funeral Home, Albany.  In lieu of flowers, contributions in Leonard’s memory may be made to Catholic Charities of the Diocese of Albany, 40 North Main Ave., Albany, NY 12203.   To leave a message of condolence for the family, please visit www.HansFuneralHome.com .

Offer Condolence for the family of Leonard P. Bopp

A Certified Celebrant is a person who is trained and certified to meet the needs of families during their time of loss.  A Celebrant serves by providing a funeral service that is ...  END_OF_DOCUMENT_TOKEN_TO_BE_REPLACED