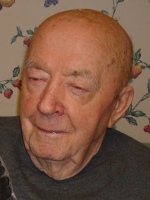 MARTINDALE – Laimonis Betins, 93, of Martindale hamlet, passed away peacefully on October 13, 2011 at St. Peter’s Hospital in Albany, New York.  His wife Milda and loving family were with him.  Laimonis was most recently a resident of Pinehaven Nursing and Rehabilitation Center in Philmont, NY.

Born January 28, 1918 in Eleja, Latvia he was the son of the late Teodors and Elizebeta (Cimmermanis) Betins.  Laimonis came to the United States as a World War II refugee in 1956 and settled in Babylon, Long Island with his wife Milda and their two children, Hans and Ilze.  He worked for most of his life in the U.S. for General Builders, a housing construction company.  Laimonis found great joy in vegetable gardening and his tomatoes, cucumbers and lettuces were the delight of his family, friends and neighbors.

In addition to his immediate family Laimonis is survived by his twin sister, Rasma Ence of Lakehurst, New Jersey.  He was pre-deceased by his brother, Arvids Betins who died in the Soviet gulag.

Interment will take place in the spring in Catskill, NY.  Donations can be made to Pinehaven Nursing and Rehabilitation Center, 201 Main Street, Philmont, NY  12565.  To leave a message of condolence for the family, please visit www.HansFuneralHome.com .

A Certified Celebrant is a person who is trained and certified to meet the needs of families during their time of loss.  A Celebrant serves by providing a funeral service that is ...  END_OF_DOCUMENT_TOKEN_TO_BE_REPLACED