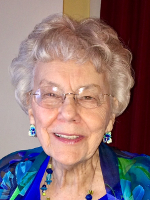 ONEONTA – On January 9th, 2017, Justine “Jus” Butler entered eternal life and joined countless relatives and friends who have been patiently awaiting her arrival.

Jus was born in Montclair, New Jersey and grew up in Bloomfield, NJ where she began “breaking glass ceilings” without realizing it and well before it became a fashionable term.  She graduated from Bloomfield High School where she was a cheerleader, a member of the Archery Team, part of the award winning choir, student government and the gymnastics team.

Justine was raised in a very strict household that also led her to become a very driven and unusually independent woman.  Her family and career lives were impacted by her inner self, which caused her to blaze her own path with an unsurpassed work ethic…which didn’t end until her final retirement at the age of 92.  She relished her independence and she passed this trait along to her offspring

During WWII, Jus joined other friends and family who entered military service by enlisting in the US Navy to actively support the war effort, serving from February 27, 1943 until October 31, 1945.  As a WAVE, she was stationed in San Diego at the US Naval Hospital and was a Pharmacist Mate (PhM2) .  Having had formal training prior to joining the Navy, upon her arrival in San Diego, she assisted with training recruits to be dental assistants.  Jus was a cheerleader for the Naval Training Center Football Team, was a member of the Naval Station Basketball Team and participated in the production of Navy training films.  Justine was the first “WAVE” to earn the “Navy Expert Pistol Shot Medal”.  She also enjoyed racing Penguin boats while in San Diego.  Justine’s service in the Navy is recorded and honored at the Women in Military Service Memorial in Washington DC adjacent to Arlington Cemetery.

Following her honorable discharge from the Navy, Justine married George Wm Butler of East Orange, New Jersey, a nationally ranked tennis player, then settled in Chatham, NJ.  There they embarked on the start of their family, with Linda Sue being the first arrival in 1948, followed by Judith Ann in 1950.  Seven years later they moved to Fords, NJ and welcomed a son, Peter George to their family.

Justine went on to a 20 year career serving in several roles at Douglass College, a part of Rutgers University, retiring from Rutgers in 1990.  Her next career move followed a relocation to Oneonta, NY, where she served as the Office Manager for The Center for Continuing Adult Learning (CCAL) for more than 20 years.  Other activities Justine has been involved with since arriving in Oneonta twenty six (26) years ago are; serving as an officer of the Audubon Society; teaching the 55 Alive defensive driving course (when she was 75+ years of age); an usher for the Glimmerglass Opera in Cooperstown, NY; and a member of “The Chain Gang” yarn work group.  Despite growing up and raising a family in New Jersey, Oneonta quite literally became Justine’s new home with reinvigorated independence following the death of her husband in New Jersey in 1990.

Justine is the last of her immediate family to depart this world, and was predeceased by her loving husband and complete gentleman, George W. Butler, her parents Ethel and Ulrich (Blackie), her brother and best friend Wilfred (Pete), sisters Dorothy (Dot) and Margie, and daughter, Linda Sue Butler.

Justine donated her body to Albany Medical College as an anatomical gift to research.  Through earlier life experience Justine learned the value of such giving.  She was a selfless person her entire life and continued to life’s end.  A private memorial service will be planned for the immediate family.

In lieu of flowers being sent to the family, please consider a gift donation to Catskill Area Hospice or CCAL in Justine’s name.

God grant me the Serenity to accept the things I cannot change, the Courage to change the things that I can and the Wisdom to know the difference.  To leave a message of condolence for the family, please visit www.HansFuneralHome.com .

Offer Condolence for the family of Justine Sue “Jus” Butler

A Certified Celebrant is a person who is trained and certified to meet the needs of families during their time of loss.  A Celebrant serves by providing a funeral service that is ...  END_OF_DOCUMENT_TOKEN_TO_BE_REPLACED