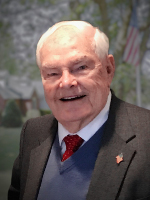 LOUDONVILLE – Joseph R. Metzger, 94, of Loudonville, passed away peacefully on Sunday, October 21, 2018 at St. Peter’s Hospital, surrounded by his family.  He was the son of the late Joseph and Anna Davis Metzger. Joe was born in Albany, and lived in the area all his life.  He was particularly proud of his roots in North Albany, and could always recall people and events from the old neighborhood with ease.

Joe’s lifelong love of music began with the trumpet at an early age, when he would travel across town for lessons regularly. It continued as he began to write and arrange music, and teach himself to play piano. In his teens, he was very active in the Albany pre-war music scene, and often played with professional swing bands as well as the CBA school band. The moment he heard the Glenn Miller Band, he became a fan for life. He also loved to sing, and was active for many years in the church choir at St. Pius X, where he was a parishioner for 62 years. Most importantly, he provided the soundtrack for many joyous family gatherings.

He was a graduate of Christian Brothers Academy class of 1942, and served in the U.S. Navy during World War II as a patrol bomber pilot. His training took him to all corners of the country and his service included the Atlantic coast, England, Hawaii, the islands of the Western Pacific and also China, serving with squadrons VPB112 and VD4.

After the war, he graduated from Siena College, where he led the college’s popular swing band, and organized and led Joe Metzger & His Orchestra, a local swing band that played during the postwar years in the Capital District. He was employed by Shell Oil, Bowser, and for many years by Liquiflo Inc. as a regional sales rep. Joe loved playing golf, and hit two holes-in-one, one at age 30 and the second at 80! He loved camping, canoeing, and fishing in the Adirondacks.  He was also a talented woodworker.

A Mass of Christian Burial will be celebrated Friday morning at 11:00 a.m. in St. Pius X Church, 23 Crumitie Rd., Loudonville.  Relatives and friends are invited, and may call at the church prior to the mass from 9-11 a.m.  Interment will be in the Gerald B. H. Solomon Saratoga National Cemetery, Friday afternoon at 1:30 p.m.  In lieu of flowers, a memorial contribution to a charity of one’s choice would be appreciated.  To leave a message of condolence for the family, please visit www.HansFuneralHome.com .

Offer Condolence for the family of Joseph R. Metzger

A Certified Celebrant is a person who is trained and certified to meet the needs of families during their time of loss.  A Celebrant serves by providing a funeral service that is ...  END_OF_DOCUMENT_TOKEN_TO_BE_REPLACED