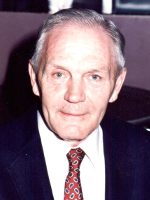 ALBANY – Joseph P. Young, formerly of Clermont St., died Monday, March 19, 2018 at the Daughters of Sarah Nursing Center.  Joe was born March 28, 1923, the son of the late William J. and Elizabeth P. Young.  He graduated from Christian Brothers Academy, and attended Siena College.  He then served in the U.S. Army Air Forces in India during World War II.  He was employed by the Times Union for thirty years, and retired in 1986 as Transportation Manager.  For many years Joe served as a volunteer delivering Meals on Wheels, and Mobile Meals for St. Peter’s Hospital.  He also served as a Eucharistic Minister at the former Church of the Holy Cross.

In the last several years, Joe appreciated those who cared for him, his nephew John Gearhardt and his beloved dog Puelo, his nephew Brian Murphy, long time friend Peggy, and his wonderful nurses and caregivers at Daughters of Sarah including Deshawna, Taz, Colleen, Tayo, and many more who gave him such wonderful care.

Funeral services will be held in the Hans Funeral Home, 1088 Western Ave., Albany, Saturday morning at 10:30 a.m., and from there to All Saints Catholic Church, 16 Homestead St., Albany (behind CVS) at 11:00 a.m.  Relatives and friends are invited, and may call at the funeral home Saturday morning from 8:30 a.m. to 10:30 a.m.  Interment will be in Memory Gardens, Colonie.  Those who wish may make a memorial contribution to All Saints Catholic Church, 12 Rosemont St., Albany, NY 12203.  To leave a message of condolence for the family or obtain directions to the funeral home, please visit www.HansFuneralHome.com.

Offer Condolence for the family of Joseph P. Young

A Certified Celebrant is a person who is trained and certified to meet the needs of families during their time of loss.  A Celebrant serves by providing a funeral service that is ...  END_OF_DOCUMENT_TOKEN_TO_BE_REPLACED