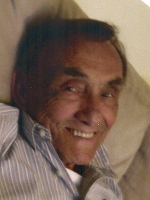 ALBANY – Joseph Paul Scalzo fell asleep in death on Saturday, December 4, 2010.  Born August 27, 1927 to Doris LaCross and Joseph Scalzo, Sr., he attended Cathedral Academy and served as an altar boy at the Cathedral of the Immaculate Conception under Father Taft.  Joe proudly served his country in World War II earning both the American Campaign and World War II Victory Medals.  He later pursued a career in the dental field working for Capital Dental Supply, Healthco Dental and Meer Dental as service manager.

Joe’s family would like to than Dr. William Tetreault of Capital Care for the outstanding medical care and concern he’s given Joe for so many years, the staff at St. Peter’s Hospital and the Hospice Inn at St. Peter’s where Joe was lovingly cared for in his final days.

A service celebrating his life will be held on Thursday at 10 a.m. in the Hans Funeral Home, 1088 Western Ave., Albany.  Relatives and friends are invited, and may call at the funeral home beginning at 9 a.m. Thursday.  Interment will follow in the Gerald B. H. Solomon Saratoga National Cemetery at 12 noon.  To leave a message of condolence for the family, or obtain directions to the funeral home, please visit www.HansFuneralHome.com.

Offer Condolence for the family of Joseph P. Scalzo

A Certified Celebrant is a person who is trained and certified to meet the needs of families during their time of loss.  A Celebrant serves by providing a funeral service that is ...  END_OF_DOCUMENT_TOKEN_TO_BE_REPLACED