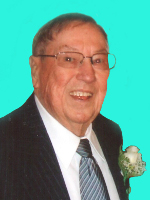 ALBANY – Joseph P. Allen, 90, of Albany, passed away peacefully with his family by his side on Monday, August 22, 2016.  The son of Joseph Francis Allen and Helen Roche Allen, he was born July 22, 1926 in Albany, and lived here all his life.  Joe graduated from St. Ann’s School in the South End of Albany. “You can take the boy out of the South End but you can’t take the South End out of the Boy”. He graduated from Christian Brothers Academy, Class of 1944 at the rank of Lieutenant and was a member of the CBA Cavalry. He attended the Albany College of Pharmacy, and graduated from Albany Business College.  Joe served in the United States Navy during WWII as a Pharmacist Mate 3rd Class, stationed at various naval installations along the east coast. While he never revealed the specifics, part of this service was to treat the wounded returning from Okinawa, an experience that left a lasting memory.

Joe and Carolina were married on September 17, 1949 beginning the next chapter in their adventure together.  They spent their honeymoon motoring from Albany to Boston with a stop in Springfield Massachusetts for a romantic dinner. After a three day stay in Boston they proceeded to Augusta, Maine and then on to Niagara Falls – A whirlwind tour of over 2,000 miles.

Returning to Albany they took up residence in a flat by the Allen Rug Company where Joe worked with his father “Big Joe” and the William Allens. A family soon started to arrive in rapid succession with the birth of Carolyn, followed by Elizabeth, Joseph, Michael, Francis and Patrick.  They took the boy out of the South End moving the family to larger (needed) living quarters but always maintained allegiance to the South End. Joe’s work career found him selling real estate and ultimately to the Albany Housing Authority where he enjoyed a 25-year career as the manager of a number of the housing facilities throughout the city. In 1990 he began the enjoyment of retirement, travel, and as “Papa Joe” to his Grandchildren and Great Grandchildren.

The family would like to express special thanks to Dr. Sean Roche whose care and concern has consistently been over and above his professional responsibilities, Sr. Jean Roche for her compassion and support during this time, the staff of the St. Peter’s Nursing and Rehabilitation Center, the St. Peter’s Hospital Intensive Care Unit and Hospice Inn.

The friends and family are invited to share in the joys of Joe’s life on Sunday, from 3-7 p.m. in the Hans Funeral Home, 1088 Western Ave., Albany.  Funeral Services will be at the Parish of Mater Christi, Hurst Ave. & Hopewell St., Albany Monday morning at 10:00am.  Interment will be in St. Agnes Cemetery, Menands.

To leave a message of condolence for the family or obtain directions to the funeral home, please visit www.HansFuneralHome.com.

Offer Condolence for the family of Joseph P. Allen

A Certified Celebrant is a person who is trained and certified to meet the needs of families during their time of loss.  A Celebrant serves by providing a funeral service that is ...  END_OF_DOCUMENT_TOKEN_TO_BE_REPLACED