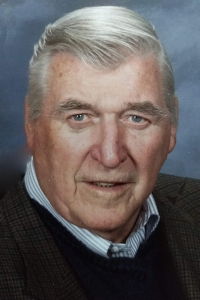 ALBANY – John M. Prenderville, 86, of Albany, died Saturday, October 26, 2019 in Samaritan Hospital, Troy, NY. Born in Richmond Hill, Queens, NY, he was the beloved son of the late Raymond and Helen Hally Prenderville. He was also pre-deceased by an infant brother, Robert.  Jack was a graduate of St. Francis Prep, and St. Francis College of Brooklyn. He served in the US Army during the Korean War from 1953 – 1955.  In the early 60’s and 70’s, he was the head basketball coach of St. Francis Prep, then St. Francis College, where he had an enviable record. Jack was elected to the St. Francis Prep Hall of Fame and The Ring of Honor, as well as the Brooklyn Old Timers and the CHSAA Basketball Halls of Fame.

Jack served as the Administrative Assistant to Congressman Hugh L. Carey and ran his Brooklyn office. He was later appointed by then Governor Carey as Deputy Commissioner of the NYS Office of Parks, Recreation and Historic Preservation. During his tenure, he was appointed as Chairman of the NYS Athletic Commission to focus on increased health, safety and integrity as professional boxing and wrestling approached the 21st century.  At the request of Governor Carey and Commissioner Orin Lehman, he spearheaded the inception and direction of the Empire State Games, the largest amateur athletic competition in the nation.

Jack had been President of the Board of Directors of American Housing Foundation since its founding in 1998, providing affordable rental apartments for the elderly throughout the Capital District Area.  He was a lifetime member of the Knights of Columbus, and was a communicant of All Saints Parish (and the former Holy Cross Parish) for 42 years. For 30 years, he spent summers with his family at Lake Walkill, in Vernon New Jersey.  He also was a longtime member of Wolfert’s Roost Country Club.  Jack loved his family, golf and good times with his many friends. He was as gentle and kind as he was grand in stature.

Jack has donated his body to the Anatomical Program at Albany Medical Center College.  Friends may visit with the family on Friday, November 1st from 4:00 – 7:00 p.m. at the Hans Funeral Home 1088 Western Avenue, Albany. A memorial mass will be celebrated Saturday, November 2, 2019 at 11AM at All Saints Catholic Church, 16 Homestead St., Albany NY 12203.  In lieu of flowers, the family has requested that gifts can be made to the John M. Prenderville ’62 Memorial Scholarship at St. Francis College ensuring Jack’s legacy and love for the “red and blue.”  To give a gift in memory of Jack: https://donate.sfc.edu/pages/the-john-prenderville-62-memorial-scholarship or mail a check made payable to St. Francis College, to the Office of Advancement, John M. Prenderville Memorial Scholarship, 180 Remsen Street, Brooklyn, NY 11201 – please mark Prenderville Scholarship in the memo section, or phone 718-489-5361.  To leave a message of condolence for the family or obtain directions to the funeral home, please visit www.HansFuneralHome.com.

Offer Condolence for the family of John M. Prenderville

A Certified Celebrant is a person who is trained and certified to meet the needs of families during their time of loss.  A Celebrant serves by providing a funeral service that is ...  END_OF_DOCUMENT_TOKEN_TO_BE_REPLACED