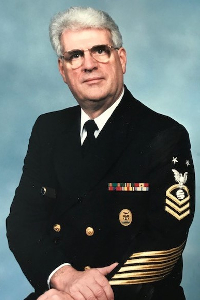 ALBANY – John “Jack” W. Ryan, born February 21, 1937 to William A. Ryan and Anna Evelyn(Werking) Ryan in Albany, NY, passed away peacefully on June 27, 2019 in the presence of his loving family at the Teresian House, Albany.  Jack was the oldest of four children, pre-deceased by brother James, and is survived by brother Paul Ryan, and sister Jean Ryan. Jack had five children, pre-deceased by son Mark Ryan, survived by James Ryan, Regina Ryan-Gaule, Teresa Ryan-Rowe, and Matthew Ryan, five grandchildren, Ian Gaule, Chelsea Ryan, Timothy Gaule, Michael Gaule, and McKenzie Ryan, daughters-in-law Lori(Peszko)Ryan and Colleen(Flynn)Ryan, and son-in-law Christopher Gaule, and long-time companion Marguerite Hogan. Jack worked for Meyerbank Electric Company for several years as an electrician before working at NYS OGS as an electrical estimator. Jack served in the Navy Reserves for over 40 years and obtained the rank of Senior Master Chief. Jack donated his remains to The Anatomical Gift Program at Albany Medical College.

A memorial mass will be celebrated in the Parish of Mater Christi, Hurst Ave. & Hopewell St., Albany on Saturday, September 14th, at 12:00 p.m.  Relatives and friends are invited, and may call at the church prior to the service from 11:00 a.m. to 12:00 p.m.  To leave a message of condolence for the family, please visit www.HansFuneralHome.com/john-jack-w-ryan/ .  Arrangements have been entrusted to the Hans Funeral Home, Albany.

Offer Condolence for the family of John “Jack” W. Ryan

A Certified Celebrant is a person who is trained and certified to meet the needs of families during their time of loss.  A Celebrant serves by providing a funeral service that is ...  END_OF_DOCUMENT_TOKEN_TO_BE_REPLACED