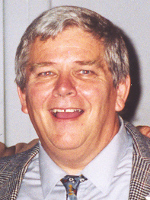 ALBANY – John J. Mullen Jr., 70, passed away on Wednesday, December 2, 2009 at the Julie Blair Nursing Home in Albany.  Born in Albany, NY on January 2, 1939, John was the son of the late John J. Mullen Sr. and Clara Rifenburgh.  John graduated from Christian Brothers Academy in 1958 and was a veteran of the United States Air Force.  He worked for 33 years at the NYS Department of Tax and Finance, specializing in computer programming, before retiring in 1995.  John was well known for his wonderful sense of humor and he brought a smile to everyone around him. He was once very active in Pop Warner Football in Rensselaer and enjoyed fishing and collecting model trains.  He also loved being around his grandchildren.

John is survived by his beloved wife of 47 years Charlotte Mullen; his children Deborah (Richard) Baker of Saratoga Springs, John (Neilene) Mullen of Delanson, and Karen (David) Bielawa of Amsterdam; his grandchildren Jordan, Daniel, Kelly, Lynne and James; and his great grandchildren Kyle and Kennedy.  He was predeceased by his sister Jenne Mullen.

A Mass of Christian Burial will be celebrated Monday morning at 9:30 in All Saints Catholic Church (formerly St. Margaret Mary’s Church), Homestead St., Albany.  Relatives and friends are invited to attend.  Inurnment will follow in Holy Sepulchre Cemetery, Rensselaer.  In lieu of flowers, donations can be made to the American Diabetes Association, 2 Pine West Road, Albany, NY 12205; or to the National Kidney Foundation, 99 Troy Road, East Greenbush, NY 12061.  To leave a message of condolence for the family, or view or print a prayer card, please visit www.HansFuneralHome.com.

Offer Condolence for the family of John J. Mullen, Jr.

A Certified Celebrant is a person who is trained and certified to meet the needs of families during their time of loss.  A Celebrant serves by providing a funeral service that is ...  END_OF_DOCUMENT_TOKEN_TO_BE_REPLACED