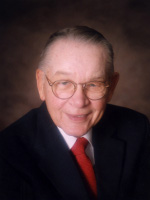 GUILDERLAND –  John F. O’Donnell, Esq., 83, an attorney who believed in the elegant logic of the law even as he pursued a philosopher’s quest to plumb the unfathom-able, died suddenly at home Monday, July 5, 2010. He had spent the Fourth of July executing swan dives off the springboard at the town pool. It was part of his annual summer ritual at Tawasentha Park, where he was on a first-name basis with the staff. He swam with his grandchildren there and managed to dip into Kant or Kierkegaard during breaks in the shade. O’Donnell, who was known as Jack, was also a passionate scholar and lifelong learner. At the time of his death, he was pursuing an extended course of independent study. He was currently studying the writings of Thomas Merton with Jeanne Wiley, associate professor of philosophy at The College of Saint Rose. O’Donnell had audited most of Wiley’s classes and a dozen more at Saint Rose in the years since his retirement. With a quiet, self-deprecating manner, O’Donnell was at peace in his core convictions. He never wavered in his bedrock faith as a devout Roman Catholic, in his devotion to his beloved wife and large family and in his abiding faith that a night at the movies and a Peppermint Pattie could sweeten almost any taste of sadness that life offered. He was a devoted husband and father, loving grandfather and uncle, true friend and wise counselor who will be remembered fondly. O’Donnell was born in Buffalo on May 30, 1927. While still a teenager, he served in the Navy during World War II aboard the aircraft carrier USS Princeton. After his military service, he attended St. Bonaventure University before earning a bachelor’s degree from Canisius College. He earned his law degree from the University of Buffalo and entered private practice with the Buffalo firm of Condon, Klocke, Ange & O’Donnell. He moved from Buffalo to the Capital Region in 1968 and served as a deputy commissioner with the state Division of the Lottery. He later joined the state Legislative Bill Drafting Commission, where he worked as a bill drafter who rendered the ideas of legislators into the precise legal language that could withstand floor debate and possible court challenges. He also penned scores of official proclamations, a skill that served him well in sprinkling his speeches at family milestones with a well-placed “whereas.” He practiced faith in action and served as an usher and Eucharistic minister at Our Lady of Angels Church in Albany and later at St. Madeleine Sophie Church in Guilderland, where he and his wife were communicants. He was also a former president of both the Secular Order of Discalced Carmelites (Third Order) in Schenectady and the Auxiliary of the St. Joseph’s Missionary Society, Mill Hill, in Guilderland. His memberships included the Legion of Mary, the Jewish-Catholic Dialogue and the American Legion.

He is survived by his loving wife of 54 years, Charlotte O’Donnell. He was the father of Ann (Michael) Carroll of Brunswick, Mary (Paul) Grondahl of Guilderland, Sheila O’Donnell of Paris, France, John (Julia) O’Donnell of Thornton, Pa. and Timothy O’Donnell of Albany. He was the grandfather of Samuel, Raphael, Caroline, Ryan, Jack and Mark. He was predeceased by his parents, Robert and Helen O’Donnell of Buffalo, and his brothers, Richard and Robert.

Calling hours will be Friday from 5-8 p.m. at Hans Funeral Home, 1088 Western Ave., Albany. A funeral Mass will be celebrated on Saturday at 10 a.m. at St. Madeleine Sophie Church, 3500 Carman Road in Guilderland. Burial will follow in St. Agnes Cemetery in Menands. Donations may be made in O’Donnell’s memory to the Discalced Carmelites of Rochester, 1931 W. Jefferson Rd., Pittsford, NY 14534. To leave a message of condolence in an online guest book, or obtain directions to the funeral home, please visit www.hansfuneralhome.com .

Offer Condolence for the family of John F. O’Donnell, Esq.

A Certified Celebrant is a person who is trained and certified to meet the needs of families during their time of loss.  A Celebrant serves by providing a funeral service that is ...  END_OF_DOCUMENT_TOKEN_TO_BE_REPLACED