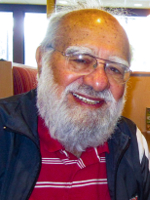 ALBANY – In loving memory of John C. Corelli, 86 who passed away in his sleep after a long illness at St. Peter’s Hospice Inn on Monday, April 10, 2017.  Born August 6, 1930 in Providence, RI to Italian immigrants, he was first generation Italian American. He graduated from Providence College in 1952, received his MS degree from Brown University in 1954 and obtained his doctorate in physics from Purdue University in 1958. Dr. Corelli moved to Schenectady, NY and worked at Knolls Atomic Power Lab before accepting a teaching position in the Nuclear Engineering department at Rensselaer Polytechnic Institute in Troy in 1962. He spent the next 35 years as a professor in various engineering disciplines including thermodynamics, nuclear physics, radiation damage in materials, and semiconductor physics among others.

In retirement, he enjoyed volunteering at the North Bethlehem Fire Department for nearly 20 years and served as the fire commissioner. He also took great pleasure with his work as Santa Claus at Crossgates Mall for 17 years bringing joy and hope to tens of thousands of visitors over that time. Upon his passing, he was accepted into the Anatomical Gift program at Albany Medical College where he will continue to teach a new generation of medical students.

In lieu of flowers, friends are encouraged to donate to their local community hospice organization. Funeral services will be held in the Hans Funeral Home, 1088 Western Ave., Albany, Monday afternoon at 3:00 p.m.  Relatives and friends are invited, and may call at the funeral home prior to the service from 1-3 p.m.   To leave a message of condolence for the family or obtain directions to the funeral home, please visit www.HansFuneralHome.com.

Offer Condolence for the family of John C. Corelli

A Certified Celebrant is a person who is trained and certified to meet the needs of families during their time of loss.  A Celebrant serves by providing a funeral service that is ...  END_OF_DOCUMENT_TOKEN_TO_BE_REPLACED