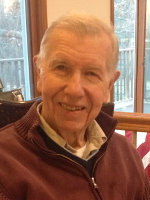 John was born and raised in Atlantic City and was an altar boy at Our Lady Star of the Sea.  He loved the beach and ocean and enjoyed boating and bicycle riding on the Boardwalk with his many childhood friends. As a young man, John worked various jobs including delivering nautical equipment throughout South Jersey and he worked alongside his father in his father’s trucking business. He was an avid sports enthusiast and an accomplished offensive lineman at Holy Spirit High School and in the intramural league at Villanova University in Philadelphia where he graduated in 1954.

John was an officer in the navy from 1956 -1959 and was stationed at the Brooklyn Navy Yard where he met Josephine Guerra, his wife and love of many years.   When his service ended, he worked for General Electric in various places including Lynn, Massachusetts, Cincinnati, Ohio, and eventually settling in Schenectady, New York.  John had a long and distinguished career silencing submarine pumps during the cold war and won many awards for his innovations and outstanding technical contributions.

The family would like to thank all of the wonderful people who have helped make John’s last days as comfortable as possible, especially the healthcare professionals at Landmark Health and Community Hospice.  The family also sends our most heartfelt gratitude and thanks to John’s longtime friends and neighbors on Parkwood Street in McKownville, who provided companionship and assistance to him over the years.

A Mass of Christian Burial will be celebrated in All Saints Catholic Church, 16 Homestead St., Albany (behind CVS) Saturday morning at 9:00 a.m.  Relatives and friends are invited, and may call at the church Saturday morning prior to the mass from 8:00 a.m. until 8:45 a.m.  Entombment will be in Memory Gardens, Colonie.

Those who wish may make a contribution in John’s memory to the Union of Concerned Scientists (www.ucsusa.org), a charity dedicated to science for a healthy planet and safer world.  To leave a message of condolence for the family or obtain directions to the funeral home, please visit www.HansFuneralHome.com.

Offer Condolence for the family of John A. Vanstone

A Certified Celebrant is a person who is trained and certified to meet the needs of families during their time of loss.  A Celebrant serves by providing a funeral service that is ...  END_OF_DOCUMENT_TOKEN_TO_BE_REPLACED