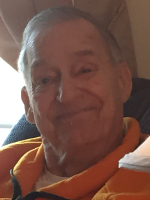 SARATOGA SPRINGS, NY – Jerry Kenneth Scoggins, our beloved husband, father, brother and friend passed away peacefully on Friday, February 3, 2017, at age 79 in Saratoga Springs, NY.  Ken was born Jan. 21, 1938 in Marietta, Ga.  He was raised in Chattanooga, Tenn., where he graduated from Kirkman High School.  Upon graduation, he enlisted in the U.S. Air Force, and was stationed at McConnell Air Force Base in Wichita, Kansas.  After serving his country, Ken attended college at the University of Tennessee and then University of Missouri where he earned his degree in social studies and education.  He also earned his master’s in education at MU.  Ken taught social studies and later became assistant principal at West Junior High in Columbia, Missouri. After a career change, he worked for Olin Corporation in Tennessee until retirement.

Ken had many interests. The Knights of Columbus, Kiwanis Club and Habitat for Humanity were organizations dear to him. He also enjoyed tutoring adults in reading. He volunteered his time and his love to those causes.

Ken devoted his life to helping others. As an Air Force serviceman, junior high teacher and advocate for many social causes, Ken taught us about sacrifice and empathy. He showed us determination in the face of health problems.  Many kids in Cleveland, Tennessee, viewed Ken as their second dad because he always looked out for others. Our home often became ground zero for “Ken talks.” He always stressed the importance of education, and his faith guided his life.

Ken is survived by his wife Judy of 55 years, his three children Angie (Tony), Andy (Carrie) and Chip (Amy); his five grandchildren Megan, Spencer, Joe, Kendall and Karson; his brothers Jim, Bruce and Don and sisters Phyllis and Glenda.  He was preceded in death by parents Rosa and Charley, and brothers Bob, Troy and Mike.

In lieu of flowers, memorials can be made to Habitat for Humanity. www.habitat.org.  A memorial mass will be held in his hometown of Cleveland, Tenn., on Saturday, February 11th at 10 a.m. at St. Therese Catholic Church.  To leave a message of condolence for Ken’s family, please visit www.HansFuneralHome.com .

Offer Condolence for the family of Jerry Kenneth Scoggins

A Certified Celebrant is a person who is trained and certified to meet the needs of families during their time of loss.  A Celebrant serves by providing a funeral service that is ...  END_OF_DOCUMENT_TOKEN_TO_BE_REPLACED