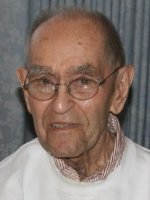 ALBANY – Jerome Flax, 91, of Albany, passed away peacefully at his home on Sunday, March 2, 2014.  Jerome has finally gone to meet his beloved Jessie Amanda.  Son of the late Julius and Alice Flax, he was born in Newark, NJ on March 17, 1922, and moved to Hudson, NY at the age of five.  He served in the U.S. Army in the Pacific during World War II for three years, and was awarded two battle stars.  He was a 1949 graduate of Siena College, and earned a Masters Degree in 1950 from the State University of New York.  From 1950 to 1965 he was an English teacher in Granville and East Islip, and then in Vernon-Verona, and Medina, where he also coached the debate team.  From 1965 until his retirement in 1982, he was employed by the New York State Education Dept.  Jerome was an ardent supporter of many organizations that help others.  He also was a member and past president of the Friends of Albany Public Library, and a member of the English Speaking Union, the Men’s Garden Club, the Torch Club and the Torah Study Group at B’Nai Shalom Reform Congregation.

In addition to his parents and his wife, Jerome was predeceased by his siblings: Rose F. Seuss, Joseph Flax and Dorothea S. Schips.  He is survived by his niece, Joann (Ed) Krawic and nephews  Marshall (Nancy) Suess and Mitchell (Michelle) Schips and his friend Fredda Peritz.

Jerome loved to travel with Jessie and was a voracious reader, especially of non-fiction.  He shared his love for books with his students and other children in his life.  Jerome was the kindest of men.  He believed that he had such a wonderful life and insisted on making contributions to those whose lot in life had not been so fortunate.  He was always grateful for Social Security, Medicare and the GI Bill, which he believed allowed him to meet Jessie, a fellow teacher, and share an incredible marriage.

Jerome’s life was filled with cherished friends, neighbors and the special “Ladies” (and a Gent) who cared for him until his last breath.  We are especially thankful for the love, caring and generosity of Kathy and Joe Pingelski, Don Miller, Russell and Maria Greenman, Jeffrey Sullivan, Dr. Richard Propp, Rita  Schachne, Oneika Miller, Barbara Davis, Maxine Lepak, Coleen Peart, Camille Johnson, Simone Foster, Dwayne Goldson and Maxine Maul.   We are also grateful to Dr. Robert Kelleher for the special care and guidance he gave, and Community Hospice for their caring support.

Funeral services will be held in the Hans Funeral Home, 1088 Western Ave., Albany on Wednesday March 5th at 3:00 pm.  Relatives and friends are invited, and may call at the funeral home Wednesday beginning 1:00 pm. A Shiva minyan will be held at 7:00 pm at the home of  Dr. Richard Propp, 13 Marion Ave., Albany NY 12203.

Interment will be held at a later date in Evergreen Cemetery in Fabius, NY.  In lieu of flowers, it is requested that donations be made to the Friends of Albany Public Library, Inc., 161 Washington Ave., Albany, NY 12210; or to B’Nai Shalom Reform Congregation, 420 Whitehall Rd, Albany, New York 12208.  To leave a message of condolence for the family, send a sympathy card, or obtain directions to the funeral home, please visit www.HansFuneralHome.com.

Offer Condolence for the family of Jerome Flax

A Certified Celebrant is a person who is trained and certified to meet the needs of families during their time of loss.  A Celebrant serves by providing a funeral service that is ...  END_OF_DOCUMENT_TOKEN_TO_BE_REPLACED