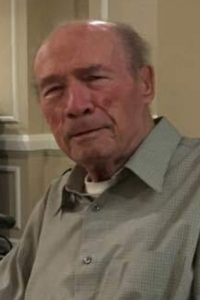 ALBANY – On Thursday, July 18, 2019, James M. Kelly gently let go of the hand of his wife Pat, the bride he cherished for 63 years, and surrounded by the love of his family he passed quietly into eternal life.   James was born in Albany, NY on January 16, 1931, to James and Isabelle (Crone) Kelly.  Jimmy the eldest of seven children, graduated from Vincentian Institute (VI Hi School), served as a NY Army National Guard reservist, and worked his way through Siena College, earning a BS degree in Physics in 1952.  Poised for a brilliant career in the defense industry, Jim decided engineering “the Bomb” was not for him, and opted instead for a job with the phone company, which resulted in his highly successful 39-year career with the NY Telephone Company, NYNEX, and Verizon. Jim also served as Director for CAPCOM Federal Credit Union.  He was a long time communicant of All Saints Catholic Church.

Jim was a quiet, humble, professional man, who rode the bus to and from his Eagle St. office, to avoid parking during the construction of the Empire State Plaza.  He carried at least one slide rule in his briefcase for calculations.  He also tried to use the slide rule to teach times tables his children.  Jim worked tirelessly to provide the best of everything for his bride and children.  The family vacationed in the Adirondacks and later he traveled throughout the United States, Canada, Europe and to many tropical islands with his beloved wife Pat.  Jim and Pat Kelly were dedicated life partners.  In their golden years, they also became golf partners, unless Jim was league golfing with the Telephone Pioneers.

Jim had a quick, dry sense of humor which he shared with the people he trusted and cared for most.  He will be sorely missed by his wife and family, and by the nurses, caregivers and pastoral staff at the Teresian House in Albany, NY. It was Jim’s wish that he be remembered as the husband, father, brother, cousin, uncle, friend and neighbor he was in life, therefore there will be no calling hours.

Friends and family are invited to participate in a Roman Catholic Mass to honor James M. Kelly on Tuesday, July 23, 2019, at 11:00am in the Infant of Prague Chapel at the Teresian House 200 Washington Ave. Ext., Albany, NY, followed by internment at Our Lady of Angels Cemetery 1389 Central Ave, Albany, NY 12205.   In lieu of flowers, please consider a donation to the Northeast Kidney Foundation, 22 Colvin Ave., Albany NY 12206 or the Unity House Domestic Violence Program, 504 Broadway, Troy, NY 12180.   To leave a message of condolence for the family or obtain directions to the funeral home, please visit www.HansFuneralHome.com.

Offer Condolence for the family of James M. Kelly

A Certified Celebrant is a person who is trained and certified to meet the needs of families during their time of loss.  A Celebrant serves by providing a funeral service that is ...  END_OF_DOCUMENT_TOKEN_TO_BE_REPLACED