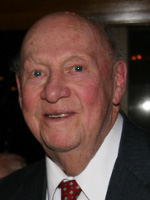 ALBANY – Horace Francis “Breeze” Breedlove went to join his beloved son Christopher Hunter Breedlove on Friday, September 30, 2011.  Breeze was born in Albany, the son of the late Horace F. Breedlove and Margaret McDonald Breedlove.  He was a graduate of Vincentian Institute and served in the U.S. Navy during World War II.  He earned a B.S. degree in Electrical Engineering from Indiana Institute of Technology in Fort Wayne, IN, and later attained his Professional Engineer License.

Breeze started his career at Alco Products in Schenectady, and in his eleven years there was involved in many areas of engineering.  He was an application engineer on oil drilling rigs and was published in World Oil Magazine.  Breeze was also the electrical engineer in charge of design and construction of the world’s first portable nuclear reactor which was deployed by the U.S. Army in Greenland.  Later, he was in charge of the electrical design and construction of the State University at Albany, and after six years in that position was employed by the State University Construction Fund, where he was involved in the electrical design at various colleges.  He retired at age 68, and two years later he returned to work as a consultant to the Richard Stevens Engineering Firm for three more years.

Breeze designed the National Little League in Albany, was active in the construction of the facilities, and also served as a little league coach for over 15 years.

Funeral services will be held in the Hans Funeral Home, 1088 Western Ave., Albany, Saturday morning at 8:15, and from there to All Saints Catholic Church, Homestead St., Albany at 9:00.  Relatives and friends are invited, and may call at the funeral home Friday from 4-8 p.m.  Interment will be in Our Lady of Angels Cemetery, Colonie.  To leave a message of condolence for the family, send a sympathy card, or obtain directions to the funeral home, please visit www.HansFuneralHome.com.

Offer Condolence for the family of Horace F. “Breeze” Breedlove

A Certified Celebrant is a person who is trained and certified to meet the needs of families during their time of loss.  A Celebrant serves by providing a funeral service that is ...  END_OF_DOCUMENT_TOKEN_TO_BE_REPLACED