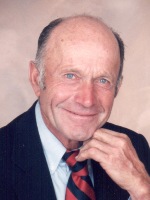 ALBANY – On Friday, August 23, 2013, Herb Bohl , cherished husband, father, grandfather, brother, uncle and friend passed away peacefully at Community Hospice of Albany at Albany Memorial Hospital after a valiant battle with cancer.  Born on January 7, 1929, in Albany to the late August C. Bohl and Gertrude Vanderhouten,  Herbert J. Bohl grew up with 12 brothers and sisters.  Herb graduated from Philip Schuyler High School, served in the Army as SFC during the Korean War and was a member of the International Union of Operating Engineers for 66 yrs.  As a vice president of the family business, August Bohl Contracting, Herb worked on many diverse projects.  The Olympic Village in Lake Placid and the reconstruction of South Pearl Street in Albany, the SUNY Campus and the South Mall (the Empire State Plaza) and more miles of road and sewer pipe than even he could remember.

Though not a simple man, he lived a simple, honest and compassionate life.  He touched countless lives and will be remembered for his impeccable work ethic, strength of character and generosity.  He was a farmer at heart and took great care of his cows and his dogs.  Wise enough to understand that life should be enjoyed with time for horseshoes and pinochle.  His faith in God enabled him to accept life’s challenges with dignity, strength and courage.

A Mass of Christian Burial will be celebrated Thursday, August 29, 2013 at 10:00 a.m. at St. Francis of Assisi Church, 391 Delaware Ave. Albany.  Relatives and friends are invited and may call at the Hans Funeral Home, 1088 Western Ave., Albany, Wednesday from 4 to 8 pm.  To remember Herb in a special way, contributions may be made to the St. John’s/ St. Ann’s Center, 88 – 4th Ave. Albany, 12202 or the St. James Food Pantry 391 – Delaware Ave. Albany 12209.  To leave a message of condolence for the family, send a sympathy card, or obtain directions to the funeral home, please visit www.HansFuneralHome.com.

Offer Condolence for the family of Herbert J. Bohl

A Certified Celebrant is a person who is trained and certified to meet the needs of families during their time of loss.  A Celebrant serves by providing a funeral service that is ...  END_OF_DOCUMENT_TOKEN_TO_BE_REPLACED