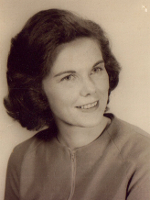 COLONIE – Harriett L. Shore, 80, of Colonie, passed away peacefully with her family at her side on Thursday, September 20, 2012.  Born Harriett L. Hobble on September 17, 1932 in Wichita, KS, the daughter of the late Theodore Foree Hobble and Grace Lyons Hobble.  She was raised in Needles, CA, and was a 1950 graduate of Needles Union High School.  She also lived in Rhode Island, Virginia, and North and South Carolina before moving to the Albany area in 1964.  Along with being a loving mother, she was employed at Macy’s in Colonie, and also served as a volunteer with the forerunner of Prevent Child Abuse NY.  In 1982 she earned an MA degree in Classics at the University at Albany.  She was a passionate reader, and was interested in women’s issues, gardening and genealogy.

Funeral services will be held in the Hans Funeral Home, 1088 Western Ave., Albany, Sunday afternoon at 4pm.   Relatives and friends are invited, and may call at the funeral home Sunday prior to the service from 2-4pm.  Internment services will be held at the Gerald B. H. Solomon Saratoga National Cemetery in Schuylerville on Tuesday at 11am.  To leave a message of condolence for the family, send a sympathy card, or obtain directions to the funeral home, please visit www.HansFuneralHome.com.

Offer Condolence for the family of Harriett L. Shore

A Certified Celebrant is a person who is trained and certified to meet the needs of families during their time of loss.  A Celebrant serves by providing a funeral service that is ...  END_OF_DOCUMENT_TOKEN_TO_BE_REPLACED