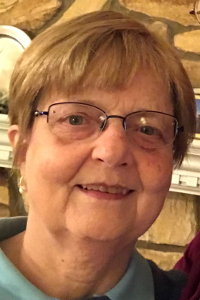 Grace was born and raised in Troy, NY, daughter of the late Carl E. and Grace L. Beck. She was a 1964 graduate of Albany Academy for Girls and then Nasson College in Sanford, ME, with a bachelor’s degree in mathematics. While at Nasson, she sang in the school’s Glee Club and served as their pianist. She later received a master’s degree in education from Russell Sage College in Troy.

Grace always had a special love for music, including the piano and cello and, in later years, the opera. In her lifetime, she also enjoyed sewing, baking, selling and collecting antique jewelry, gardening and canning preserves. Her family especially remembers her love of rhubarb and her delicious peach marmalade.

In 1970, Dr. Timothy Harris was brought from Colorado to establish the very first Pulmonary Function lab in the area at the Albany Medical Center.  Grace was hired to set up the laboratory under Dr. Harris and became its supervisor for over twenty years.  She then moved to oversee the Quality Assurance program for all the laboratories under the Laboratory Services.  One high point was the accolade afforded her by the Joint Commission for Accreditation of Hospitals for her summary approach and record keeping and presentation of laboratory quality assurance issues.

She is survived by her close friend of many years, Dean E. Wilder of Albany; three sisters, Phyllis Atkinson of Manassas, VA, Lois O’Brien of Braintree, MA, and Barbara Dertinger (Dr. Thomas) of Phoenix, AZ; a brother, Carl Beck Jr. of Cornelius, NC; a cousin, Linda Cappabianca (Frank) of Glens Falls, NY, and several nieces and nephews. She also leaves behind longtime. friends Richard Wolven of Castleton and Polly Mason of Cohoes.

A memorial service and interment will be held at a later date. To leave a message of condolence for the family, please visit www.HansFuneralHome.com.

Offer Condolence for the family of Grace E. Beck

A Certified Celebrant is a person who is trained and certified to meet the needs of families during their time of loss.  A Celebrant serves by providing a funeral service that is ...  END_OF_DOCUMENT_TOKEN_TO_BE_REPLACED