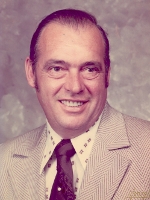 ALBANY – Glendon S. “Glen” Henry, 85, of Guilderland and Punta Gorda, FL, died Friday, June 25, 2010 at the Stratton DVA Medical Center in Albany.  Mr. Henry was born in Rumford, ME, but lived most of his life in the Capital District.  He served in the U.S. Navy during World War II as a TBM Avenger gunner.  Later he was employed by Livermore Chevrolet and Don Allen Chevrolet in Albany, and then operated his own shop Glen Henry’s Autobody.  He was a charter member of the Guilderland Elks, the DAV, the Altamont VFW, and in Florida the Blind Veterans Association.  He also was a member of the North Bethlehem Fire Dept., the Independent Autobody Association, and a former member of the Knights of Columbus.  He was active in the Upper Western Independent Little League, and his autobody shop was a team sponsor.  He was a communicant of Christ the King Church in Guilderland, where he served as a church usher and was a member of the church bowling league.  He also served as an usher for Fr. Ralph DiOrio’s Apostolate of Divine Mercy and Healing.

The Henry family would like to express their gratitude to the staff of the VA hospital floors 9b and c, and the Atria Shaker staff for the compassionate care they provided Mr Henry.

Funeral services will be held in the Hans Funeral Home, 1088 Western Ave., Albany, Wednesday morning at 9:30, and from there to Christ the King Church, Sumpter Ave., Guilderland at 10:30.  Relatives and friends are invited, and may call at the funeral home Tuesday from 4-8 p.m. The parish family of Christ the King Church will gather at 4:30 pm Tuesday in the funeral home for a service of prayer and remembrance.  All are welcome.   Interment will be in St. Agnes Cemetery, Menands.  To leave a message of condolence for the family, or obtain directions to the funeral home, please visit www.HansFuneralHome.com.  In lieu of flowers, contributions in his memory may be made to Fisher House Foundation, Inc., 111 Rockville Pike, Suite 420, Rockville, MD 20850-5168 designated for the Stratton VA Medical Center Fisher House, or to the Blinded Veterans Association Florida Regional Group, 3801 Coco Grove Ave., Miami, FL 33133.

Offer Condolence for the family of Glendon S. “Glen” Henry

A Certified Celebrant is a person who is trained and certified to meet the needs of families during their time of loss.  A Celebrant serves by providing a funeral service that is ...  END_OF_DOCUMENT_TOKEN_TO_BE_REPLACED