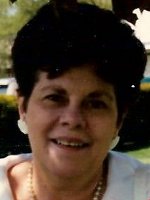 ALBANY – Gertrude E. Soyer Mendel, 83, of Albany, died Tuesday, January 24, 2012 at the Teresian House in Albany.  Trudy was born February 19, 1928 in Sioux City, IA, the daughter of the late Peter and Mary Soyer.  Trudy was known by her contagious smile and everlasting generosity and kindness.  She had many hats in the world, but Trudy’s favorite and most rewarding job was that of mom and grandma.  In addition, she and her late husband owned the Betsy Ross Diner and Mendel’s Pub, and later in life she was employed by St. Peter’s Hospital and Honigsbaum’s Department Store.

A Memorial Mass will be celebrated Friday morning at 11:00 in the Infant of Prague Chapel at the Teresian House, 200 Washington Ave. Ext., Albany, NY 12203.  Relatives and friends are invited.  There will be no calling hours.  In lieu of flowers, memorial contributions may be made to the Teresian House.  Arrangements have been entrusted to the Hans Funeral Home, Albany.  To leave a message of condolence for the family or send a sympathy card please visit www.HansFuneralHome.com.

Offer Condolence for the family of Gertrude E. Mendel

A Certified Celebrant is a person who is trained and certified to meet the needs of families during their time of loss.  A Celebrant serves by providing a funeral service that is ...  END_OF_DOCUMENT_TOKEN_TO_BE_REPLACED