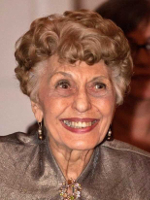 SLINGERLANDS – Germaine “Mimi” Graf passed away at her home on Thursday, June 28, 2018. Born Germaine Muscat on April 9, 1923 in Paris, France to Salvatore Muscat and Georgette Pesquet Muscat, she was predeceased in February, 1999 by her devoted husband of 53 years, Homer (“Hank”) Graf.

During World War II, she worked as a messenger for the French Resistance and as the “Dear Abby” of the magazine, “Movie Stars.” She met her soon to be husband, who welcomed her with fluent French, at a USO dance celebrating the liberation of Paris. It was love at first sight. Hank was on the staff of General George Patton and the General cut through military red tape so they could marry in Paris. After a short time in Los Angeles, they moved to New York and while raising their children in Queens and Rockland County, Germaine became active in the Spring Valley PTA and persuaded the School Board to institute foreign languages in elementary school. She was an early graduate of the SUNY Empire State College and taught French at Pearl River High School in the 1960’s. Hank and Germaine moved to Albany in1983 after Hank sold his New York auto-body supply business. After Hank’s death in 1999, Germaine looked for an interesting outlet, so returned to teaching. She taught French at the Academy of the Holy Names from1999-2013, where she was known by all her students as “Madame.” At her retirement at age 90, she was recognized by the New York State Legislature for her gift as an educator. She spent her last years as a fine bridge player, friend, colleague, devoted grandmother and doting great-grandmother.

She will be interred with her beloved husband at the Albany Rural Cemetery.   Relatives and friends are invited to attend a memorial gathering on Saturday, August 4, 2018, at 3:00 p.m. at the Beverwyck Retirement Community, 40 Autumn Drive, Slingerlands.  In lieu of flowers, Mimi has requested that donations be made to the Juvenile Diabetes Research Foundation (JDRF), 950 New Loudon Road, Suite 330, Latham, NY 12110.  To leave a message of condolence for the family, please visit www.HansFuneralHome.com.

Offer Condolence for the family of Germaine “Mimi” Graf

A Certified Celebrant is a person who is trained and certified to meet the needs of families during their time of loss.  A Celebrant serves by providing a funeral service that is ...  END_OF_DOCUMENT_TOKEN_TO_BE_REPLACED