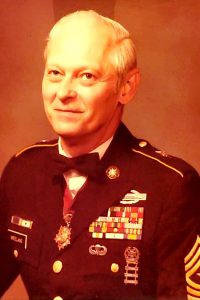 ALBANY – George L. Vreeland, 88,  of Guilderland, passed away on Tuesday, August 13, 2019.  George was born in the town of Root, NY, the son of the late LeRoy George Vreeland, and Early Ellwood Vreeland.  He was raised in Fort Plain, NY, and was employed by General Electric in Schenectady in the 1950s as a carpenter and as an electrical designer.  He took time away from G.E. to serve in the U.S. Army in the Korean War.  He then joined the New York National Guard, where he served for 37 years, retiring in 1991 as a Sergeant Major with 40 years served.  During his time in tour of duty he had become a P.O.W.  He later was employed for 22 years by Mechanical Technology Inc. as an electrical designer.  He was a member of the Robert L. Weininger Memorial VFW Post 8692.  George was also known as a modeler, meticulously crafting models of wooden ships and cabins, at times even drawing his own set of plans for the work.

George was predeceased by his wife Evelyn LaFave LaHera Vreeland.  He is survived by his daughter Kyle Vreeland Masiello of Salisbury, NC; his son Terry Lee Vreeland, Sr. of Salisbury, NC; his stepdaughter Arlene F. LaHera of Port St. Lucie, FL; his stepson Ramon R. LaHera, Jr. of Albany; and by 11 grandchildren and 5 great grandchildren.  He was predeceased by his son Scott Vreeland, his stepdaughter Kathleen H. Vreeland, and by one grandchild.

A Life Celebrant service will be held in the Hans Funeral Home, 1088 Western Ave., Albany, Wednesday morning at 11:00 a.m.  Relatives and friends are invited, and may call at the funeral home Wednesday morning prior to the service from 9-11 a.m.  Interment will follow in St. Agnes Cemetery, Menands.  [OPTIONAL: The family suggests memorial contributions to name & address.]  To leave a message of condolence for the family or obtain directions to the funeral home, please visit www.HansFuneralHome.com .

Offer Condolence for the family of George L. Vreeland

A Certified Celebrant is a person who is trained and certified to meet the needs of families during their time of loss.  A Celebrant serves by providing a funeral service that is ...  END_OF_DOCUMENT_TOKEN_TO_BE_REPLACED