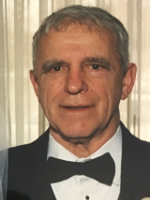 ALBANY – George K. McCarg, Sr., 89, of Albany, passed away on Friday, January 5, 2018, at St. Peter’s Nursing & Rehab.  George was born in Albany, and lived here all his life.  He was a graduate of the former Cathedral Academy, where he lettered in three sports, playing basketball, baseball, and football.  He served in the U.S. Army, and was employed for many years by Wilson Meat Packing Co. in Troy, where he also was a member of the meatcutters union and served as a shop steward.  He was also employed by the New York State Office of General Services.  George loved horse racing, especially at Saratoga, visiting casinos, vacationing at the Finger Lakes, and he was a big fan of the Dallas Cowboys.  He also volunteered as a coach at the American Little League and at the Boys Club.

George was predeceased by his parents Clifford McCarg and Marie Fahrenkopf McCarg, and by his sons Clifford McCarg and George K. McCarg, Jr.  He is survived by his beloved wife of 67 years, Margaret E. Padula McCarg; his daughters Marie McCarg and Karen Gebhardt (Mark); his grandchildren Angela McCarg, Alex Gebhardt, and Kerry Gebhardt; his great grandchildren Nierah, Tearri, and Terrance; his brother and sister in law Josie and Tony Maio; and by many nieces and nephews.

The family would like to express their thanks to the staff of St. Peter’s Nursing & Rehab for the wonderful care they provided George.

A Mass of Christian Burial will be celebrated in All Saints Catholic Church, 16 Homestead St., Albany (behind CVS) Tuesday morning at 9:00 a.m.  Relatives and friends are invited, and may call at the church Tuesday morning prior to the mass from 8:00 a.m. until 8:45 a.m.  Interment will be in Our Lady of Angels Cemetery at a later date.  In lieu of flowers, memorial contributions may be made to All Saints Catholic Church, 12 Rosemont St., Albany, NY 12203.  Arrangements have been entrusted to the Hans Funeral Home, Albany.  To leave a message of condolence for the family, please visit www.HansFuneralHome.com.

Offer Condolence for the family of George K. McCarg, Sr.

A Certified Celebrant is a person who is trained and certified to meet the needs of families during their time of loss.  A Celebrant serves by providing a funeral service that is ...  END_OF_DOCUMENT_TOKEN_TO_BE_REPLACED