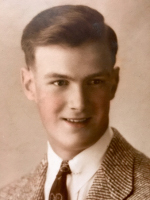 Frank was born on May 1, 1924,  a proud member of the Greatest Generation—a World War II veteran who started the war patrolling the beaches of New Jersey for U-boats and who ended his Coast Guard career as a Signalman 2nd Class aboard the LST 767, blinking out messages to alert other allied ships of danger. When his ship wrecked at the invasion of Okinawa, he rescued the 48-star American flag from the stern—only to find it and fly it again for the first time on Memorial Day 2016.

Frank’s parents Al and Margaret Bishop taught him all he would ever need to know about loyalty to family, faith in God, and strong belief in always doing the right thing.  The Brothers at CBA gave him an unshakeable value system, as he graduated 1st Lieutenant 2nd Battalion in 1940.

When Frank returned from war, he went to work for New York State, eventually logging 43 years at the Transportation Department.   It was there that he met the vivacious Betty Connery, whom he would always call the most beautiful girl he ever saw.   They married in 1947 and began a family.  Their firstborn, Michael Francis died at birth.  By 1956, he and Betty were a family of six—three boys and a girl, and living the American Dream that his wartime duty had helped to preserve. 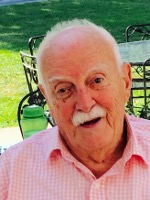 Having put off college to enlist, Frank went back to get his degree while raising four children.  He worked days at the State, and went to Siena College Night School.  It took a grueling seven years for him to finish his degree but he never wavered.    At Christmastime, he would add a part-time job that would keep him going round the clock so that his children would have presents under the tree.

Happily, it wasn’t all work. No one was more devoted to his children than Frank Bishop, spending endless summer hours playing ball, and fishing, and swimming in Kinderhook Lake with them, or packing up the car after a long week at work and heading out in the old 1948 Dodge to Frontier Town.

Frank was also an avid bowler, who went into the record books in 1963 when he rolled a Perfect Game at the old Hoffman’s Lanes in Colonie—getting his “300” with a two-fingered ball!

In 1984,   Frank bought part interest in Pepper’s Nipper whom he raced with high hopes at Saratoga Harness.   He loved his horse, and he loved the experience, even though Pepper’s Nipper never came home in front.

Frank loved to travel with Betty and the kids and pet bunny Reggie to Dennisport and Duxbury. In 1985, he retired from NYS DOT and he and Betty became regulars on bus trips to Atlantic City and Mohegan Sun and Foxwoods.  Even though his legs started to fail him, by the time he reached his 80’s, they were going to the Saratoga Racino every week.  He became the unofficial “mayor” of the Colonie Crossings, tipping his hat and saying hello to everyone as he was wheeled through the park and the trees he loved.   And he couldn’t get enough of his raspberry ice cream at Guptill’s.

He handled illness and adversity with amazing dignity and humor—and because of his health issues made some lasting friends in his health aides Mike Zee, Faith Gregory, Danielle Moshier and Bianny.  Thanks to their huge hearts and love of adventure–and of “Pop” as they called him–he had the best year of his life.

Frank was predeceased by the love of his life, Betty Connery Bishop.  He is survived by his children Frank J. Bishop, Jr. (Robin C.) and Peter E. Bishop (Judith Faith) both of Albany; Elizabeth Ann “Liz” of Saratoga Springs, and Paul G. Bishop (Diane) of Albany; his grandchildren Colleen Davignon (Russ), Audrey Bishop and Gregory Bishop; his great granddaughter Maya Rose Vasquez; his sister Eileen Bishop Loomis (David) and by many nieces and nephews.  He was predeceased by his sisters Margaret Mary Bishop and Bernice B. Waterson.

Funeral services will be held in the Hans Funeral Home, 1088 Western Avenue, Albany, Thursday morning at 11:30 a.m., and from there to the Grotto of Our Lady of Lourdes in the old Vincentian Institute, from which all four Bishop children graduated, on Ontario and Yates Streets, Albany at 12:30 p.m.

Relatives and friends are invited to call at the funeral home Wednesday from 4-8 p.m.   Interment will be in St. Joseph’s Cemetery, Troy.  To leave a message of condolence for the family, or obtain directions to the funeral home, please visit www.HansFuneralHome.com .

Offer Condolence for the family of Frank J. Bishop

A Certified Celebrant is a person who is trained and certified to meet the needs of families during their time of loss.  A Celebrant serves by providing a funeral service that is ...  END_OF_DOCUMENT_TOKEN_TO_BE_REPLACED