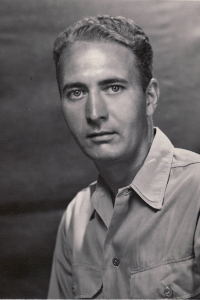 GUILDERLAND – Francis J. Welnhofer, 101, passed away on Friday, December 4, 2020 at his home.  Francis was born in Albany, the son of the late Francis J. and Elizabeth Kahlert Welnhofer.  He served in the Army during World War II, having described his contribution many times as having served in the “fighting ordinance,” since his job had been to keep the weaponry in working order.  Frank was employed for over 30 years by the General Electric Co. in Schenectady.

Frank had a great sense of humor and attributed his amazing longevity to “good luck” and a beer a day – which he made sure to enjoy right up to the end!  One of Frank’s best memories, which he continued to enjoy through pictures, was the time he spent up at Saranac Lake, on Burnt Island, where he and his family enjoyed a camp for many years.  He had been most in his element there and really loved being so close to the land.

Frank spent his later years continuing to keep up with current affairs, really enjoying partaking in a good conversation about them whenever he could.  A conversation regularly started with “I was reading about…”  He read a number of publications faithfully, front to back, enjoying Time, and Smithsonian, the daily newspapers and many other regular favorites, every day.  Having grown up in Guilderland, he really enjoyed reading the Altamont Enterprise and keeping up with what was going on in the Town.

Frank and Ginny, married on January 2, 1960, greatly enjoyed touring the U.S. during their retirement.  They were fortunate to have had many opportunities, through a group of army friends of Frank’s from his time in the service, to visit many different areas of the country.  Each member of the group would take turns hosting a summer get-together and they went to great lengths to share the best parts of their location with their visitors.  Frank and Ginny had a great time on these visits and took their duties very seriously when it was their turn to show off the Capital District.

Football was another great love and Frank made sure everyone knew that Sunday afternoons he would not be available, particularly when the Buffalo Bills or the NY Giants were on.  He was sure to scan the schedule each week to be sure a game was never missed!

Frank really enjoyed spending time with his grandchildren during his retirement and he remained close to them through regular conversations, visits, and (more recently) zoom calls.  He always lit up when they were in contact and he really looked forward to the frequent contact.

Frank was predeceased by his beloved wife Virginia A. Welnhofer in 2016. He is survived by his children Judi (Ron) Frey and David (Sharon) Welnhofer; his grandchildren David (Sarri), Steven, and Emily Frey, and Nathan, Alex and Lila Welnhofer. He is also survived by his great-granddaughters, Aurora, Astra and Viola, as well as his well-loved McCann nieces and nephews.  Frank was also predeceased by his sister Bettie (Welnhofer) McCann and brother in law Paul McCann.

Funeral services will be held privately at the convenience of the family.  Interment will be in Our Lady of Angels Cemetery, Colonie.  Arrangements have been entrusted to the Hans Funeral Home, Albany.  To leave a message of condolence for the family, please visit www.HansFuneralHome.com.

Offer Condolence for the family of Francis J. Welnhofer

A Certified Celebrant is a person who is trained and certified to meet the needs of families during their time of loss.  A Celebrant serves by providing a funeral service that is ...  END_OF_DOCUMENT_TOKEN_TO_BE_REPLACED