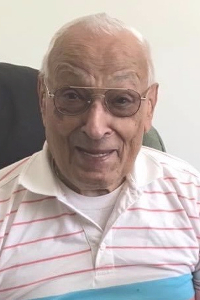 ALBANY – Francis J. Sgambelluri passed away peacefully with his son and daughter by his side at the Shaker Point Nursing Facility in Colonie, NY on Saturday, August 28th, 2021.  Francis was a WWII Vet and fought in Europe with the Third Army under General Patton.  Upon honorable discharge he went to work at House of Montaque in Albany, learning the trade and as Upholsterer/Cutter, and later worked at Rothbards in Voorheesville until retirement.  He later married his high school sweetheart and love of his life, Anna Maniscalco, who passed in 2014.  He enjoyed sewing so much that he would make drapes, pillows, and assorted bags for his family and friends.  He, also, helped in the family business, The Paramount Lounge in Schenectady, where he worked side by side with his brother Mike. 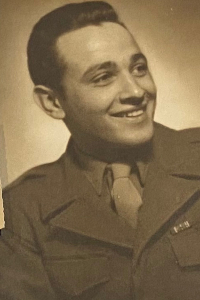 The family is requesting no flowers, instead, donations suggested to the Veterans Administration Hospital, 133 Holland Avenue, Albany, NY 12208 in the name of Francis Sgambelluri.  The family would like to extend their sincere gratitude to the VA Hospital Adult Care Program, The Atria of Delmar, and Shaker Point Nursing Facility in Colonie, NY for their superior care during his stay.

Services are entrusted to Hans Funeral Home, 1088 Western Avenue, Albany, NY 12203.  Calling hours will be Wednesday, September 1st, 2021 from 9AM-11AM in the funeral home, with mass following at the Parish of Mater Christi, 40 Hopewell Street Albany, NY.  Entombment will be at Evergreen Memorial Park, 2150 Central Avenue, Schenectady, NY.  To leave a message of condolence for the family or obtain directions to the funeral home, please visit www.HansFuneralHome.com.

Offer Condolence for the family of Francis J. Sgambelluri

A Certified Celebrant is a person who is trained and certified to meet the needs of families during their time of loss.  A Celebrant serves by providing a funeral service that is ...  END_OF_DOCUMENT_TOKEN_TO_BE_REPLACED