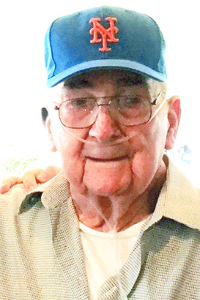 ALBANY – Francis “Frank” H. Keller, 84, of Albany, NY, passed away on April 6, 2019 in the Hospice Inn at St. Peter’s Hospital after a long battle with chronic illness. Born in Queens, NY, he was the son of Francis A. and Florence (Smith) Keller. Frank and his wife Peggy lived on Long Island until 1998 when they relocated to Albany to be closer to family. Frank graduated from High School at the age of 17 and served in the US army as a mechanic for three years. He then married his wife, Peggy and worked as an airplane mechanic and inspector for Seaboard world airlines at JFK. He continued to work after Flying Tigers took over and then retired at the age of 55 when Federal Express took over.

Frank had limited mobility of his left arm his entire life. It never stopped him from working hard to support his family. Frank loved his cars and always had at least one of his children assist him while changing the oil or repairing the brakes. Although Frank worked for an airline, he preferred to take his family camping up and down the east coast. He would think nothing of getting off work and then drive from New York to Florida in twenty-four hours just so his kids could go to Disney World when it first opened. One of Frank’s favorite pastimes was to watch a “good” game. It really did not matter if it was baseball, football or hockey. If the game was “good” he watched it. The Mets were his all-time favorite team.

Frank is survived by his wife Peggy (Margaret) of 63 years; his children Deborah A. Keller (George Chernetz) of Kinnelon, N.J., Lynda A. Rizzuto (Domenick) of Albany, N.Y., and Brian J. Keller (Kim) of Milton, Georgia. He is also survived by his sister Joan Aguilera of Hartford, Conn.; six grandchildren and two great granddaughters. He was predeceased by his brother Richard Keller.

Family and friends are invited to call at the  Hans Funeral Home, 1088 Western Ave. Albany, NY, Thursday morning from 10:00 a.m. until 12:00 noon. Interment will follow at the Gerald B.H. Solomon Saratoga National Cemetery, 200 Duell Rd., Schuylerville, NY 12871, at 1:30 p.m. In lieu of flowers, the family requests contributions be made in Frank’s name to a charity of one’s choice.  To express your sympathy or share a memory, please visit www.HansFuneralHome.com .

Offer Condolence for the family of Francis H. Keller

A Certified Celebrant is a person who is trained and certified to meet the needs of families during their time of loss.  A Celebrant serves by providing a funeral service that is ...  END_OF_DOCUMENT_TOKEN_TO_BE_REPLACED