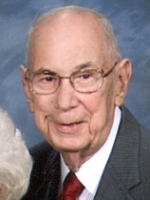 ALBANY – Francis E. Logan died Saturday, November 24, 2012.  He was born Aug. 23, 1923 to the late Louisa Karl Logan and Thomas Logan, and was raised by Elizabeth Karl Otto and Harry Otto.  He was baptized by the Rev. Brahm at Redeemer Lutheran Church in Albany, and grew up in First Lutheran Church of Albany, where he became a very active member of the church, serving on the Church Council, as Luther League Leader, a member of the Mens Club, Sunday School supervisor and teacher, and singing in the choir.  He married Mildred Mead, and they had three children.

Mr. Logan is survived by his wife Mildred Mead Logan; his son Richard, his daughter Sandra O’Connor and her husband Neil, Jr., his son Bruce and his wife Kathy Gower Logan; his four grandchildren Rebecca Logan Holdsworth (George), Matthew Logan, Elizabeth Logan O’Connor, and Neil O’Connor III (Katie).  He was predeceased by his father and mother, his brothers Thomas, Howard, and Kenneth, and his sister Lucille.

Funeral services will be held in the Hans Funeral Home, 1088 Western Ave., Albany, Wednesday morning at 9:00, and from there to the First Lutheran Church of Albany, 181 Western Ave., Albany at 10:00.  Relatives and friends are invited, and may call at the funeral home Tuesday from 3:30-6:30 p.m.  Interment will be in Graceland Cemetery, Albany.  Contributions may be made in Francis’ name to First Lutheran Church Albany, Abiding Memorial, 646 State St., Albany, NY 12203.  To leave a message of condolence for the family, send a sympathy card, or obtain directions to the funeral home, please visit www.HansFuneralHome.com.

Offer Condolence for the family of Francis E. Logan

A Certified Celebrant is a person who is trained and certified to meet the needs of families during their time of loss.  A Celebrant serves by providing a funeral service that is ...  END_OF_DOCUMENT_TOKEN_TO_BE_REPLACED