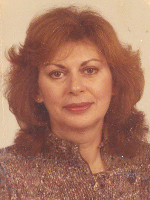 GUILDERLAND  – Erna Jean Courtney, 76, daughter of the late Thomas and Marie (Bauer) Courtney, left us on October 7, 2009.  Erna grew up in the South End of Albany, regaling the neighborhood kids with stories based on books she’d read.  An avid reader and engaging storyteller with a wonderful sense of humor, Erna married her high school sweetheart Dick Coffey, and moved to live with him on a U.S. Marine base in Florida, where her son Ricky was born.  After an amicable divorce, Erna moved back to Albany with Ricky and worked as manager of Pearl Grant Richman’s in Stuyvesant Plaza shopping mall.  A natural beauty, Erna also modeled in New York City and Albany.  She subsequently married Robert Brownstein and pursued her artistic interests, becoming a poet, an award-winning artist, sculptress, and a successful interior decorator.  Following the birth of her second son, Alex, Erna briefly worked as a real estate broker but ultimately returned to her real passion – art — as a maker of antique porcelain doll reproductions.  Following a divorce, Erna served the Catholic community via ministry with the Carmelite order, and later retired to become an antique dealer — a profession she stayed in throughout the rest of her life.  Erna was a witty, spiritual, and creative soul.  She was a devoted mother, daughter, and grandmother who could always be relied upon and aways put her family first.  She will be sorely missed.

Erna leaves behind two sons, Richard Coffey of Port St. Lucie, Florida, and Alex Brownstein of Niskayuna, New York; her daughter-in-law, Walda Chesnut-Brownstein, and a much beloved granddaughter, Amelia Rae Brownstein, 8 years old.  Erna had spent the entire day with Amelia on September 28 (whom she called “Little Luv”), playing games, laughing, drinking tea, and talking about times past.  She is also survived by her brother, Thomas Courtney Jr., of Cherry Point, North Carolina, and her sister, Barbara Denkhaus, of Rockledge, Florida.

An entombment service will be held at the mausoleum in Our Lady Help of Christians Cemetery, 41 Jolley Road, Glenmont, NY 12007 at 1pm on Monday, October 12, 2009.  Relatives and friends are invited.  To leave a message of condolence for the family please visit www.HansFuneralHome.com.

Offer Condolence for the family of Erna J. Courtney

A Certified Celebrant is a person who is trained and certified to meet the needs of families during their time of loss.  A Celebrant serves by providing a funeral service that is ...  END_OF_DOCUMENT_TOKEN_TO_BE_REPLACED