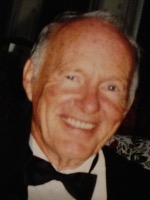 ALBANY – Edward Ryan, 93, of Albany, passed away on Monday, February 16, 2015 at the Albany Stratton VA Medical Center.  Ed was born in Albany, and lived here all his life.  He served in the U.S. Navy beginning in 1939 and through World War II.  He was a graduate of the University of Illinois, and worked for many years as an architectural representative on many major construction projects including the Empire State Plaza in Albany.  He also was a life member of the Albany Elks Lodge #49.

Ed is survived by his beloved wife Mary Lou Herbinger Ryan; his children John Ryan (Debbie) of Kentucky, Kevin Ryan (Margaret) of Branford, CT, Mary Graham (Jonathan) of Aurora, IL, Edward Ryan of Kalamazoo, MI, and Robert Ryan (Susanne) of Averill Park; and by seven grandchildren.  He was predeceased by his five siblings.

A Mass of Christian Burial will be celebrated Saturday morning at 9:00am in All Saints Catholic Church, 16 Homestead St., Albany (behind CVS).  Relatives and friends are invited, and may call at the funeral home Friday from 5-8 pm.  To leave a message of condolence for the family or obtain directions to the funeral home, please visit www.HansFuneralHome.com.

Offer Condolence for the family of Edward Ryan

A Certified Celebrant is a person who is trained and certified to meet the needs of families during their time of loss.  A Celebrant serves by providing a funeral service that is ...  END_OF_DOCUMENT_TOKEN_TO_BE_REPLACED