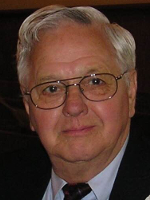 ALBANY – Edward G. O’Brien, 81, of North Albany passed away at home on Friday, February 17, 2017.  Edward was born in Cohoes on March 20, 1935 and was the son of the late Adele Potyrala O’Brien and Edward O’Brien.  He served in the US Navy and retired from the NYS Department of Labor.  He was a devout communicant of Sacred Heart Church in North Albany.

Edward was predeceased by his daughter, Elaine O’Brien Pettit and his sister, Carol A. Tierney.  He is survived by his beloved wife of 59 years, Mary Davis O’Brien of Albany; his son Timothy (Lisa) O’Brien of Colonie; his daughters Karen (Jay) Driscoll of Albany, and Christine O’Brien Inger of Delmar; his son in law Derek S. Pettit of Albany; his loving grandchildren Conor Driscoll, Margaret Driscoll and Jack Driscoll of Albany, Julia Pettit of Albany, and Kathleen Inger of Delmar.  Edward is also survived by several nieces and nephews.

A memorial mass will be held on Saturday at 10:00 a.m. at Sacred Heart Church in North Albany.  There will be no calling hours as Edward’s wishes were to have his remains donated to Albany Medical College’s Anatomical Gift Program.  Those who wish may send a remembrance to Sacred Heart Church Food Pantry, 33 Walter St., Albany NY 12204; or to Stride Adaptive Sports, 4482 NY Highway 150, West Sand Lake, NY 12196.  To leave a message of condolence for the family, please visit www.HansFuneralHome.com.

Offer Condolence for the family of Edward G. O’Brien

A Certified Celebrant is a person who is trained and certified to meet the needs of families during their time of loss.  A Celebrant serves by providing a funeral service that is ...  END_OF_DOCUMENT_TOKEN_TO_BE_REPLACED