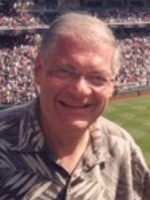 ALBANY – On the morning of October 13, 2015, Ed passed away peacefully after a three-year battle against cancer.

As a toddler, Ed would sit in a gray, metal wash tub in front of the family black and white television set, wearing earmuffs, mimicking sportscaster Jim McKay — one of his heroes.  If YouTube had been invented, video of Ed would have been trending.

Ed made his radio debut during a show called “Teenagers in Country Music” in 1970.  Ed’s mother would drive him to station WOKO Radio very early each Saturday morning with his younger sister, Maureen, in tow.  Dusty Miller, the host, knew that this 14-year-old volunteer was a special individual and was going to become an outstanding talent.

The nuns at St. James Institute and Cardinal McCloskey High School often had to rein him in, but when local radio personality, Don Weeks, hired him at WGY Radio at age 15, he told Ed to relax and have fun.  Don’s guidance and friendship helped shape Ed’s continuing years in radio.

Boom Boom Brannigan from WABY Radio worked with Ed in the 1970’s when radio was at its best.  The radio community was a committed crew where people learned how to cue up a record, write a news story in 30 seconds, broadcast the day’s events and report sports scores – 22 times over.

Love for radio broadcasting always stayed with Ed and he would jump back into radio in the 1990’s at WTRY Radio where Walt Adams offered Ed wise career advice. Ed was truly grateful for his friendship.

Nonetheless, television sports broadcasting in the 1970’s became Ed’s career path when he was hired part-time at WNYT TV, Channel 13.

Ed’s incredible memory for sports statistics and his ability to create excitement in his play-by-play, led to his full-time sports reporting with Rip Rowan when he was hired by Tom Bryson at WTEN TV, Channel 10 in 1977.  Rip and Ed were a formidable sports reporting duo.  Ed loved his job and trusted in the experience of the finest reporters in the Capital Region while working at WTEN TV and making life-long friends.

In 1982, Ed interviewed Reggie Jackson and asked “Mr. October” about leaving the Yankees.  Reggie was very unhappy with Ed’s questions and directed some R-rated language at Ed.  Ed left with a signed baseball.

Interviewing was one of Ed’s true journalistic skills.  His geniality, trustworthy demeanor and arsenal of data and statistics put individuals, whether they were sports figures or politicians, in that enviable position for reporters of wanting to talk to him.

Also thrilling to Ed was World Wrestling Entertainment (WWE).  From Hulk Hogan to a chance run-in on an airplane with fellow Irishman Sheamus the Celtic Warrior, Ed was in the moment.  Add in some music from Elvis or maybe a little Frank Sinatra, and Ed would be content.

During the late 1970’s and early 1980’s, sports broadcasting and ESPN were on the cusp of something phenomenal and Ed envisioned the global potential.  Ed could have become a big television market-ESPN broadcaster, but when his daughter, Jackie, was born in 1983, he chose to be close to her in the Albany area and share in her parenting.

With Jackie, Ed found the most happiness and was a loving, kind, caring, protective and vulnerable father.  John McLaughlin, reporter at WTEN TV, said the Capital Region discovered Ed’s humanness when the station aired a Father’s Day promo showing Ed playing with Jackie in Washington Park pushing her on a swing.  Ed’s favorite song for Jackie at the time was Stevie Wonder’s sweetest tune, “Isn’t She Lovely.”

To Ed’s dismay, Jackie’s first word was not “Yankees,” but he was soon teaching her how to throw a softball, hit a ball and keep a scorebook.  A shared passion for the game between father and daughter helped develop Jackie’s commitment and athleticism in softball.  Ed was fully involved in Bethlehem Tomboys Softball as a manager, coach and cheerleader always wearing his signature Hawaiian shirts.  His support and unwavering devotion helped Jackie became a Division 1 softball player at The University at Buffalo.

Besides the Yankees and softball, Ed loved the ponies – especially racing at Saratoga Race Track.  His television family felt his enthusiasm as they listened every morning to his horse knowledge from recounting former races to trying to handicap upcoming Triple Crown stakes.  Ed loved travelling to the Saratoga Harness Track with his brother Dick, talking with patrons and betting exactas.

Ed’s love of horses also translated into his love for all animals.  On a trip to Ireland, any time he saw a cow he had to stop and take a photo.  But his childhood dog, Mickey, and his grand-dog, Brenna, were undoubtedly some of Ed’s favorite beings.  Ed and Brenna could regularly be seen in the summer traversing the Normanskill Creek and sharing ice cream at Tastee Freez, navigating the Mansion Neighborhood eating hot dogs from plaza vendors or taking in a Nationals game in Washington D.C.

Besides boasting about how smart Brenna was, Ed was a Will Shortz fan and consistently would finish the Saturday New York Times crossword puzzle – a gift shared from his father.

Many of Ed’s early-morning television viewers heard some of his stories as Ed was masterful at storytelling during his A.M. newscasts on WRGB TV, Channel 6.  Ed started working at WRGB TV in 1991 as a morning newscaster and producer.  Ed co-anchored the morning news with many exceptionally talented and supportive colleagues and friends through his 24-year career at Channel 6.  His faithful viewers loved Ed’s banter, presentation, intelligence and genuine smile as they drank their first cup of coffee of the day with him.

Throughout Ed’s long, insufferable battle against cancer, there were numerous individuals who loved and cared for him.  The devotion of his daughter, Jackie, has been extraordinary shining in its pureness of giving, caring and strength.  Ed’s friend for over 15 years, Kelly, has been at his side every day with encouragement, constant support, comfort and love.  Ed’s siblings have surrounded him with a loving familial bond that can only be formed early in a big Irish family.

Thank you to all of the medical professionals who had a hand in Ed’s treatment.  Heartfelt gratitude to the nurses, technicians, social workers, doctors, staff and volunteers of Community Hospice and at the St. Peter’s Hospice Inn where tenderness and sincerity surrounded Ed’s final journey and who communicated to Ed what Ed’s family already knew– that he’d been heroic and courageous, acting with dignity every day. .

A memorial service will be held at the Hans Funeral Home, 1088 Western Ave, Albany, on Friday, October 16, 2015 at 12:00pm.  Relatives and friends are invited, and may call at the funeral home prior to the service from 10:00am to 12:00pm.  In lieu of flowers, memorial contributions in memory of Ed may be made to Old Friends at Cabin Creek, 483 Sand Hill Road, Greenfield Center, NY 12833, www.oldfriendsatcabincreek.com.  To leave a message of condolence for the family or obtain directions to the funeral home, please visit www.HansFuneralHome.com.

A Certified Celebrant is a person who is trained and certified to meet the needs of families during their time of loss.  A Celebrant serves by providing a funeral service that is ...  END_OF_DOCUMENT_TOKEN_TO_BE_REPLACED