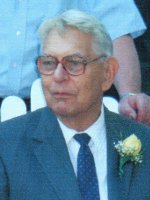 GUILDERLAND – Edward C. Zyniecki Jr., age 88, passed away peacefully on Friday,  January 24, 2014.  Ed was born, September 30, 1925 in Milwaukee, Wisconsin to Anna Zyniecki nee Blochowiak and Edward C. Zyniecki .  Edward graduated in 1943 from East Milwaukee High and attended Marquette University where he received a Mechanical Engineering Degree.  Ed went into the boiler business and traveled with that career.  It was during one of those trips that he met his wife, Leota.  Ed and Lee celebrated 65 years of marriage on November 20, 2013.  Ed and Lee made their home in Guilderland where they raised their 7 children.  Ed owned and operated J.W. Stevens Company, retiring in 1996, Chicken Cluckers, and EDLEEZ Tobacco.  Ed enjoyed traveling with Lee and they both were pilots, flying their CESSNA 182 to various destinations.  Most importantly, Ed was a family man, you would often find him telling stories of life and bouncing a baby on his lap.

In the last months of his life Ed was able to spend quality time with his family building memories that will be with them always.  His final care is entrusted to Hans Funeral Home.  A memorial service will be held at a later date at the convenience of the family.  To leave a message of condolence for the family or send a sympathy card, please visit www.HansFuneralHome.com.

Offer Condolence for the family of Edward C. Zyniecki

A Certified Celebrant is a person who is trained and certified to meet the needs of families during their time of loss.  A Celebrant serves by providing a funeral service that is ...  END_OF_DOCUMENT_TOKEN_TO_BE_REPLACED