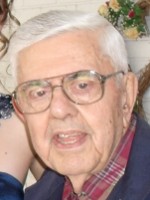 ALBANY – Dr. Paul J. Centi, PhD, of Albany, passed away peacefully with family by his side on Friday, February 11, 2011 at the Albany Medical Center.  Dr. Centi was born in Amsterdam on September 20, 1923 to Anthony and Mary (Agosta) Centi.  He was a veteran of service in the U.S. Army during World War II, where he first taught engineering at the University of Alabama before serving in France.  He was a 1948 graduate of Siena College and earned his doctorate at Fordham University. He held teaching positions at Mount St. Mary’s College and St. Peter’s College, and was Assistant Director of Psychological Services at Fordham. He was also director of the Counseling Center at Holy Cross College. Dr. Centi later served as Professor of Psychology and Director of the Counseling Center at Siena College. He retired Professor Emeritus from Siena in 1987.

Dr. Centi is survived by his beloved wife of 59 years, Dorothy Infante Centi; his children Daniel (Rosemary) Centi, Mary (Jean) Nelson, Paul Centi, Dorothy Centi-Jones, and Elizabeth Centi-Grogan; his grandchildren Daniel A., Justin (Amanda) and Jacqueline Centi, Joseph, Jeffrey and Christopher Nelson, Paul and Micaela Jones, Alyssa and Daniel Grogan; his sister Clem (David) Brumley; his sisters in law Terry and Ruth Centi; and by several nieces and nephews.  He was predeceased by his brothers Joseph and Gabe.

Funeral services will be held in the Hans Funeral Home, 1088 Western Ave., Albany, Wednesday morning at 8:30, and from there to the Parish of Mater Christi, Hurst Ave., Albany, at 9:30.  Relatives and friends are invited, and may call at the funeral home Tuesday from 4-8 p.m.  Interment will be in Mt. Carmel Cemetery, Amsterdam.  In lieu of flowers, the family asks that donations be made in his name to the Siena College Foundation Fund for Special Projects, Siena College, 515 Loudon Rd., Loudonville, NY 12211.   To leave a message of condolence for the family, send a sympathy card, or obtain directions to the funeral home, please visit www.HansFuneralHome.com.

A Certified Celebrant is a person who is trained and certified to meet the needs of families during their time of loss.  A Celebrant serves by providing a funeral service that is ...  END_OF_DOCUMENT_TOKEN_TO_BE_REPLACED