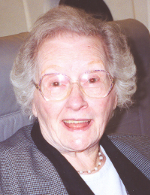 ALBANY – Dorothea Margaret (Stephenson) Santen, age 92, passed away peacefully at her home, on Tuesday, December 15th, 2009. Born in Rutland, VT on June 3rd, 1917, she was the daughter of the late Philip and Nona Stephenson. Her family moved to Albany when she was a young girl, where she attended PS-4 and graduated from The Milne School. She went on to graduate from the University of Michigan at Ann Arbor and received a Master’s degree in Public Administration from the Maxwell School of Syracuse University. Dottie worked for the New York State Education Department as an archivist in the field of local public records, where she met her future husband, Vernon. Following their marriage in 1953, Dot began her most satisfying career as a homemaker and mother. She was active in the School 19 PTA and her daughters’ Girl Scout troops for many years. She was a Deacon at the Madison Avenue Presbyterian Church (now known as New Covenant Presbyterian Church). For Dot, family always came first. She enjoyed spending time at her daughter’s camp on Schroon Lake and eagerly awaited the annual summer trip to Cape Cod. A highlight of her travels was an Alaskan Cruise taken with her extended family in 2003. Her grandchildren, Kelly and Kevin, were a continuous source of pride and delight. She watched them play in countless hockey games while growing up.

She was the widow of Vernon B. Santen, to whom she was married for 26 years until his passing in 1979. She was predeceased by her brothers, (Philip) Roger and Robert Stephenson and her sister, Eleanor Kasin. She is survived by her loving daughters, Patti Rider and her husband, David, of Glenmont; Margi Santen and her partner, Pamela Waite, of Albany; her cherished grandchildren, Kelly and Kevin Rider, her “adopted” grandson, Jonas Svensson of Sweden and by her nephews: Alan, Jay and Bruce Kasin, Kent Stephenson and her niece, Missy Curtis.

Calling hours will be held on Saturday, December 19, 2009, from 9:00 am until 11:00 am at Hans Funeral Home, 1088 Western Ave., Albany. A service will follow at the funeral home at 11:00 am. Internment will be at the Calvary Cemetery, Glenmont, NY, immediately following the service.

Dot made it her mission to give generously to a wide variety of charities. In lieu of flowers, please consider making a donation, in her name, to the charity of your choice.   To leave a message of condolence for the family, view or print a prayer card, or obtain directions to the funeral home, please visit www.HansFuneralHome.com .

Offer Condolence for the family of Dorothea M. Santen

A Certified Celebrant is a person who is trained and certified to meet the needs of families during their time of loss.  A Celebrant serves by providing a funeral service that is ...  END_OF_DOCUMENT_TOKEN_TO_BE_REPLACED