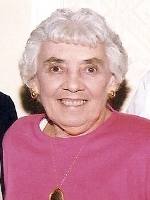 ALBANY – Doris E. Egan Breyette, 88, of Albany, died Monday, December 13, 2010 at her home.  Mrs. Breyette was born in Lowell, MA, the daughter of the late John W. Egan and Doris E. MacKenney Egan, and was raised in Chazy and Dannemora, NY.  She lived for many years in Morrisonville, NY before moving to Albany in 1982.  She was employed by Bell Aircraft in Buffalo during World War II as a P-39 production inspector, and later was employed for many years by the Clinton County Dept. of Social Services.  She served as a Cub Scout den mother, and was a communicant of St. Alexander’s Church in Morrisonville, and St. Margaret Mary’s and All Saints Catholic Churches in Albany.

Mrs. Breyette was predeceased by her husband Oril Breyette, Jr., and her son Richard Breyette.  She is survived by her sons Reg Breyette (Linda) and Gary Breyette of Morrisonville, and Gene Breyette (Brenda) of Schoharie; her sister Frances Benson of Albany; her brothers John Egan (Virginia) and Richard Egan (Frances) of Albany; her grandchildren Angela Jorczak (Phil), Shane Breyette (Sabrina), and Eric, Todd, Amanda, Bethany, Kelly and Renee Breyette; her great grandchildren Shelbi, Baylee, Kylee and Coleton; her great great granddaughter Amelia; and by many nieces and nephews.  She was also predeceased by her sisters Esther Carrier, Ruth Shambo, and Elinor and Alice Egan.

Funeral services will be held in the Hans Funeral Home, 1088 Western Ave., Albany, Friday morning at 8:45, and from there to All Saints Catholic Church (formerly St. Margaret Mary’s Church), Homestead St., Albany at 9:30.  Relatives and friends are invited, and may call at the funeral home Thursday from 4-7 p.m.  Spring interment will be in St. Alexander’s Cemetery, Morrisonville.  Those who wish may make memorial contributions to Community Hospice of Albany, 445 New Karner Rd., Albany, NY 12205.  To leave a message of condolence for the family or obtain directions to the funeral home please visit www.HansFuneralHome.com.

Offer Condolence for the family of Doris E. Breyette

A Certified Celebrant is a person who is trained and certified to meet the needs of families during their time of loss.  A Celebrant serves by providing a funeral service that is ...  END_OF_DOCUMENT_TOKEN_TO_BE_REPLACED