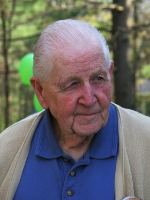 GUILDERLAND – Donald M. “Nash” Nasholds, 92, of Guilderland, passed away on Monday, February 13, 2017 in the Hospice Inn at St. Peter’s Hospital.  Nash was born in Albany, the son of the late Craig Nasholds and Maud Pitcher Nasholds.  He lived in the area all his life, and was a graduate of Albany High School.  He served in the U.S. Army Engineers during World War II in North Africa, Italy and France.  He was then employed by the New York Telephone Co. for 39 years, and was a member of the Telephone Pioneers.  Nash led a very family-centered life, and enjoyed camping and vacationing with his family.

While preparing his obituary, we were asked if he had any hobbies or was a member of any club or institution.  But for a few later years of playing golf with his buddies, his only avocation was his family, including his greyhound Penny.  He and Mom took us all over the place with a station wagon and travel trailer in tow.  On one notable trip to Maine, Nova Scotia and Prince Edward Island there were six of us along plus one more due to be born just a few months later.  How they managed to put up with us it is hard to imagine.  The end result is seven brothers and sisters who all love each other and get along very well still all these years later.  Family was everything to them.  Everything.

Calling hours will be held from 4pm-7pm Friday May 26 at Hans Funeral Home, 1088 Western Ave. Albany, NY 12203.  Private interment will be in Woodlawn Cemetery in Berne.  To leave a message of condolence for the family or to obtain updated service information, please visit www.HansFuneralHome.com.

Offer Condolence for the family of Donald M. “Nash” Nasholds

A Certified Celebrant is a person who is trained and certified to meet the needs of families during their time of loss.  A Celebrant serves by providing a funeral service that is ...  END_OF_DOCUMENT_TOKEN_TO_BE_REPLACED