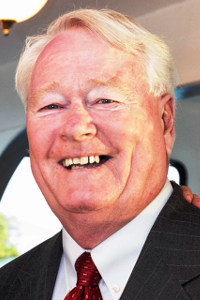 ALBANY – Daniel J. Leyden, 70, of Albany, passed away peacefully at home on Friday, August 23, 2019 surrounded by loving family and lifelong friends.  Dan was born in Springfield, MA, the son of the late Robert D. and Eileen F. Godfrey Leyden.  His family moved to Albany in 1954.  Dan was a proud graduate of Vincentian Institute, Class of ‘67.  In high school he excelled at basketball and baseball.  He continued playing baseball while earning his degree at the College of the Holy Cross.  Dan also played baseball in the Albany Twilight League for several years, and was named rookie of the year in 1969.  In 2011, he was inducted into the Bishop Maginn High School Alumni Assocation Hall of Fame for athletics.  Dan was employed by Banker’s Trust Co. during his early twenties and then began a 28 year career with Albany County working in personnel.  He retired in 2004 as Director of Civil Service.  Dan enjoyed reading, golf, cooking, watching the Yankees and visits from his grandkids. He was an avid fan of music from his favorite decade, the 50’s.  He was a member of the Twilight League Veterans assocation, and a 35 year member of the Knights of Columbus.  Throughout his life Dan treasured the friendship of a group of loyal friends he had since grade school.  He was loved and cherished by his children, extended family and countless friends.

Dan is survived by his children Michael G. Leyden (Sara) of Bristol, VT, Thomas D. Leyden (Melanie) of Danville, CA, and Kathryn L. Yund (George) of Glenmont; his siblings Robert Leyden (Brenda) of Albany, Brian Leyden (Rose) of Malta, Virginia DeWolf (Thomas) of Cherry Hill, NJ, and Teresa Tiernan (Thomas) of Jamestown, RI; and by his brother in law Roland Mahony of Albany.  Dan is also survived by his 4 grandchildren and 12 nieces and nephews. He was predeceased by his sister Judy Mahony.

A Mass of Christian Burial will be celebrated in St. Vincent de Paul Church, Madison Ave. & Partridge St., Albany Thursday morning at 11:00 a.m.  Relatives and friends are invited, and may call at St. Vincent de Paul Church on Wednesday from 4-7 p.m.  Interment will be in Our Lady of Angels Cemetery, Colonie.  Arrangements have been entrusted to the Hans Funeral Home, Albany.  To leave a message of condolence for the family, please visit www.HansFuneralHome.com.

Offer Condolence for the family of Daniel J. Leyden

A Certified Celebrant is a person who is trained and certified to meet the needs of families during their time of loss.  A Celebrant serves by providing a funeral service that is ...  END_OF_DOCUMENT_TOKEN_TO_BE_REPLACED