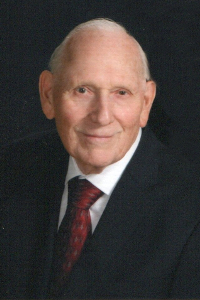 ALBANY – Charles John Schmidt, 94, a resident of the Avila Independent Living Community in Albany, passed away on Wednesday, March 9, 2022 at Albany Medical Center Hospital.  Born in Manhattan on February 6, 1928, he was the only son of Swiss parents Carl and Emma Naef Schmidt and was raised in the Bronx.  He earned degrees from Columbia College (BA), Columbia School of Engineering (BSME), and RPI (MS Management).  He joined the GE Test Engineering Program in 1951and obtained his first permanent assignment at the Knolls Atomic Power Laboratory (KAPL) in 1953 with responsibility for the auxiliary steam system equipment on the USS SEAWOLF Project. Subsequent assignments included: coordination of the SIR Project nuclear propulsion plant casualty study; KAPL Representative to the Naval Reactors Technical Information Group; established and managed the KAPL Naval Reactor Technical Information Center; administered the KAPL Patent and Information Classification Programs. He retired from KAPL in 1993 as Program Manager, Information Protection and Control after 42 years of service with the General Electric Company.  Charlie served a term as Chair of the Upstate New York Chapter of the American Society of Information Science (ASIS), now the Association for Information Science and Technology (ASIS&T). He held a Professional Engineer license from New York State.

He was a communicant of the St. Kateri Tekakwitha Roman Catholic Church on Rosa Rd, Niskayuna.  He also was an avid duplicate bridge player and achieved the ACBL rank of Gold Life Master, often playing with his wife Dorothy whom he met at the bridge table. He also enjoyed golf, tennis, table tennis, walking, boating, theater, Broadway musicals, an extensive vinyl record collection, and many family events. He often injected his dry humor into conversations.

Relatives and friends are invited, and may call at the Hans Funeral Home, 1088 Western Ave., Albany on Monday from 4-7 p.m.  Funeral services will be held at St. Kateri Tekakwitha Parish, 2216 Rosa Road, Schenectady Tuesday at 9:00 a.m.  Interment will be in Most Holy Redeemer Cemetery, Niskayuna.  To honor the memory of Charlie’s son Dan, donations may be made to American Foundation for Suicide Prevention (AFSP), 199 Water Street, 11th Floor, New York, NY 10038.  To leave a message of condolence for the family or obtain directions to the funeral home, please visit www.HansFuneralHome.com.

This is a video tribute to Charlie:

Offer Condolence for the family of Charles J. Schmidt

A Certified Celebrant is a person who is trained and certified to meet the needs of families during their time of loss.  A Celebrant serves by providing a funeral service that is ...  END_OF_DOCUMENT_TOKEN_TO_BE_REPLACED