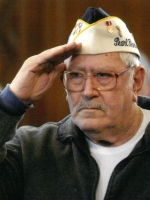 GUILDERLAND – Charles E. Ebel, 95, of Guilderland, passed away Tuesday, November 25, 2014 at Albany Medical Center Hospital.  Charles was born in Guilderland, and lived in Albany and Guilderland all his life.  He attended Altamont High School, enlisted in the U.S. Navy in 1940, serving through the duration of World War II until discharged in 1946.  He served aboard the USS Curtiss (AV-4) during the attack at Pearl Harbor.  He later served aboard the USS Hornet (CV-12).  He was employed for many years by GLF/Agway until his retirement.  Charles was a member of the American Legion Post 977 Helderberg, American Legion Joseph E. Zaloga Post#1520, and the former Pearl Harbor Survivors Association.  He played baseball for several leagues including Albany Twilight League. Charles was also an avid bowler and enjoyed many activities that included hunting, fishing, skiing, billiards and camping.

Funeral services will be held in the Hans Funeral Home, 1088 Western Ave., Albany, Saturday evening at 6pm.  Relatives and friends are invited, and may call at the funeral home Saturday from 3-6 p.m.  Inurnment will be in the Gerald B.H. Solomon Saratoga National Cemetery on Monday at 1:30pm.  In lieu of flowers, the family suggests memorial contributions to the Mohawk Hudson Humane Society, 3 Oakland Ave., Menands, NY 12204.  To leave a message of condolence for the family or obtain directions to the funeral home, please visit www.HansFuneralHome.com.

Offer Condolence for the family of Charles E. Ebel

A Certified Celebrant is a person who is trained and certified to meet the needs of families during their time of loss.  A Celebrant serves by providing a funeral service that is ...  END_OF_DOCUMENT_TOKEN_TO_BE_REPLACED