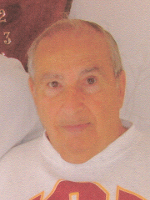 ALBANY – Litterio “Larry” Cassera, 75, walked into the arms of The Lord Thursday, July 9, 2009 at the Stratton DVA Medical Center. Larry was born in Albany, NY on March 5, 1934, the son of the late Anthony “Champ” and Mary Rose Cassera. He moved to Florida in 1983, and in 2000 became a “snowbird,” traveling between there and Albany. Known as Larry the Horse, Mr. Cassera served in the Army from 1955-1957, and bowled in Korea and Japan with the Armed Forces Far East Team. He was a member of the PBA and successfully competed in both the regular and senior tours. He and partner Joey Schmidt won the ABC Eastern Zone National Doubles, and Larry appeared bowling on TV many times in both the US and Canada. Throughout his career, Larry bowled four 300 games, and was inducted into the Glens Falls Bowling Hall of Fame. Mr. Cassera was the manager and owner of several bowling centers in the Capital District and Florida. He was also an avid golfer, was a member of the Zolga Post Country Club and the Town of Colonie Golf Club, and played bocci with the WAIBS. Larry was known as a great story teller and was a joy to be around. He was known to be quick witted, have a contagious laugh, and was a true people person. A strong man and good provider, Larry always had time for teaching others.

Mr. Cassera is survived by his wife of 53 years, Mary Ann Cassera, who he faithfully made great coffee for every morning. He is also survived by a son, Thomas J. Cassera (Tammy), a daughter, Theresa Davis (Jimmy), a brother John Cassera (Cathy), a sister, Marianne Hinckley (Ken), grandchildren Anthony, Kimberly, Thomas, and Nicholas, great grandchildren Adrianna and Scotty, and several nieces and nephews. Mr. Cassera also leaves behind a 17-year-old dog Sparky that he loved very much.

A Mass of Christian Burial will be celebrated Monday morning at 10:00AM in the St. Francis DeSales Church, 1 Maria Dr., Albany. Relatives and friends are invited and may call at the Hans Funeral Home, 1088 Western Ave., Albany on Sunday evening from 4 until 7:00 PM. Interment will be in Our Lady of Angels Cemetery, Albany.  To leave a message of condolence for the family or obtain directions to the funeral home, please visit www.HansFuneralHome.com.

Offer Condolence for the family of Litterio “Larry” Cassera

A Certified Celebrant is a person who is trained and certified to meet the needs of families during their time of loss.  A Celebrant serves by providing a funeral service that is ...  END_OF_DOCUMENT_TOKEN_TO_BE_REPLACED