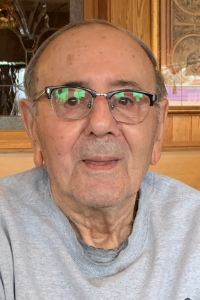 ALBANY – Carlo N. Briscoli, 89, passed away on Monday, November 15, 2021 at Albany Medical Center Hospital.  Carlo was born in the Bronx, and raised in Italy, until his family was able to return to the U.S. after World War II in 1947.  He served in the U.S. Army in Germany from 1955 to 1957.  He worked for many years as a tile and marble setter, and was employed by Lanzetta Marble, Vermont Marble while working on the Empire State Plaza, and by his beloved Albany Marble & Hudson Valley Tile for many years until retiring.  He was a member of the Zaloga Post, the Elks Club, and the West Albany Club.  He also was a life member of the Bricklayers & Allied Craftworkers (BAC) union local #2.

Carlo is survived by his wife Donna M. Gallup Briscoli; his daughter Patricia Briscoli (Victor Mahoney) of Loudonville; his stepson James Becker (Theresa Johnson); his sister Clara Sverbel of Albany; his stepsister Gabriella Maggioli of Italy; his granddaughter Julia Rose Mahoney; several stepgrandchildren; and by several nieces and nephews.  He was predeceased by his parents Fortunato Briscoli and Adalgisa Paternioni; his stepfather Ettore Gadani; his son Dr. Paul Briscoli; his stepbrother Ettore Gadani, Jr.; and his brother-in-law Joseph Sverbel.

A Mass of Christian Burial will be celebrated Friday morning at 9:00 a.m. in All Saints Catholic Church, 16 Homestead St, Albany (behind CVS).  Relatives and friends are invited, and may call at the Hans Funeral Home, 1088 Western Ave., Albany, Friday morning prior to the mass from 8:00 a.m. to 8:45 a.m.  Entombment will be in Evergreen Cemetery, Colonie.  The family suggests memorial contributions to either the American Heart Association, or the American Cancer Society.  To leave a message of condolence for the family or obtain directions to the funeral home, please visit www.HansFuneralHome.com.

Offer Condolence for the family of Carlo N. Briscoli

A Certified Celebrant is a person who is trained and certified to meet the needs of families during their time of loss.  A Celebrant serves by providing a funeral service that is ...  END_OF_DOCUMENT_TOKEN_TO_BE_REPLACED