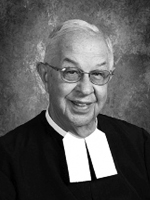 Brother Casimir always gave special attention to students who struggled, and would stay with them until they got their feet on the ground.  He also had a great love for the theatre and the arts, and produced many musicals in the schools where he served.  He also loved horses, and would show, ride, and jump horses.

In addition to his parents, Brother Casimir was predeceased by his brother Emil Gundlach, Jr., his sister Alice Corkrey, and his aunt Sr. Alice Michalski, C.R.  He is survived by his sister Regina Cozzy (Thomas) of Bradenton, FL, and by many nieces, nephews, and grand nieces and nephews.

A Mass of Christian Burial will be celebrated in the chapel of Christian Brothers Academy, 15 Airline Drive, Colonie, on Saturday, May 20th, at 10:00 a.m.  Interment will follow in St. Agnes Cemetery, Menands.  To leave a message of condolence for the family, please visit www.HansFuneralHome.com.

Offer Condolence for the family of Brother Casimir Gundlach, F.S.C.

A Certified Celebrant is a person who is trained and certified to meet the needs of families during their time of loss.  A Celebrant serves by providing a funeral service that is ...  END_OF_DOCUMENT_TOKEN_TO_BE_REPLACED