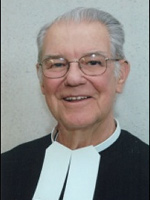 ALBANY – Br. Aloysius Urban Myers (born John Francis Paul Myers) died on Thursday, May 12, 2011 at Riverview Hospital in Red Bank, NJ.  He was born on August 16, 1930, in Manchester, New Hampshire to Arthur J. and Gertrude Boyle Myers.  His early education was at St. Joseph’s in Manchester, and he entered the Juniorate of the Brothers of the Christian Schools on August 30, 1947 in Barrytown, New York.  Brother entered the Novitiate in 1949 and professed First Vows on September 9, 1950.  He received a Bachelor of Science in Education from Manhattan College in 1951.

Br. Aloysius began his teaching career as a Prefect at Hillside Hall in Troy in 1951.  He then was a teacher-prefect at La Salle School in Albany for one year, and assigned to Christian Brothers Academy in Albany beginning in 1952.  In 1957 he was appointed principal of the junior high at CBA, and remained in that position until he moved to the high school division in 1967.  In 1969 he was assigned to Bishop Bradley High School in Manchester, NH where he taught and directed the Brothers Community until 1974.  In September, 1974, he returned to CBA Albany where he was Director of Guidance until March of this year, when he retired to De La Salle Hall in Lincroft, NJ.

Besides his parents, Br. Aloysius was predeceased by four brothers and one sister.  He is survived by one brother, Robert Myers of Manchester, NH, and 19 nieces and nephews; his religious community, The Brothers of the Christian Schools; and the many students he worked with over his 60 years in active ministry.

In lieu of flowers contributions may be made to the Brother Al Scholarship Fund, Christian Brothers Academy, 12 Airline Drive, Albany, NY 12205.

Viewing will be held on Sunday, May 15 and Monday, May 16, 2011 from 5 pm until 8:00 pm, at the Christian Brothers Academy, 12 Airline Drive, Albany, NY, 12205. The Mass of Christian Burial will be celebrated at the Church of St. Pius X, 23 Crumitie Road, Loudonville, NY at 10:30 am on Tuesday, May 17.   Interment will be in St. Agnes Cemetery, Menands. Arrangements have been entrusted to the Hans Funeral Home, Albany. To leave a message of condolence or view or print a prayer card please visit www.HansFuneralHome.com .

Offer Condolence for the family of Brother Aloysius Myers, F.S.C.

A Certified Celebrant is a person who is trained and certified to meet the needs of families during their time of loss.  A Celebrant serves by providing a funeral service that is ...  END_OF_DOCUMENT_TOKEN_TO_BE_REPLACED