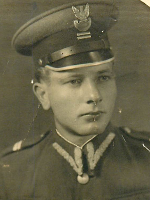 GUILDERLAND – Boleslaw “Bolek” Zuk passed away on Sunday, August 12, 2018 at Our Lady of Mercy Life Center after a long illness.  Bolek was born in Nowa Ruda, Poland on September 30, 1936.  He met and married his wife Wladyslawa “Wladzia” Urbanowicz while he was serving in the Polish Army.  According to his wife, he was described as a “hooligan.”  As a young boy he and his brothers would throw potatoes at the German soldiers who marched through their village during the World War II invasion of Poland by the German Army.

Bolek brought his wife and young daughter to America in 1962 through the legal process, to provide a better life rather than living in Poland under the Communist government.  He was employed by the Ford Motor Co. in Green Island for many years.  Family was the most important aspect in his life.  He had the immigrant work ethic, which he instilled in his children and grandchildren.  We all believe he was the greatest father and grandfather.

Bolek was predeceased by his beautiful wife Wladzia, and by four brothers and two sisters.  He is survived by his daughter Mariola (Michael) McManus; his son Mark (Lynn) Zuk; his grandchildren Mark (Ashley) Deso, Michael (Jen) Deso, and Madison, Nicholas, and Jordan Zuk; his great grandchildren Juliana Deso and Landon Deso; his sister Katarzyna Jankowski; and by many many nieces and nephews.

The family would like to thank the staff at Our Lady of Mercy Life Center, especially the Guadalupe unit, for the compassionate care they showed to our father and grandfather.  To the Guadalupe staff, thank you very much!!!

Funeral services will be held in the Hans Funeral Home, 1088 Western Ave., Albany, Thursday at 12:00 p.m.  Relatives and friends are invited, and may call at the funeral home Thursday prior to the service from 10:30 a.m. until 12:00 p.m.  Interment will follow in Our Lady of Angels Cemetery, Colonie.  To leave a message of condolence for the family or obtain directions to the funeral home, please visit www.HansFuneralHome.com.

Offer Condolence for the family of Boleslaw Zuk

A Certified Celebrant is a person who is trained and certified to meet the needs of families during their time of loss.  A Celebrant serves by providing a funeral service that is ...  END_OF_DOCUMENT_TOKEN_TO_BE_REPLACED